IN HER DEFENSE, by author AMY IMPELLIZZERI (releases May 3rd!)

Ingrid DiLaurio lives in Riversedge, New York, four express train stops from Manhattan. Don't be fooled: With its tree-lined Main Street, and quaint ambiance, Riversedge is only impersonating a small town. While it’s a place small enough for everyone to know each other’s secrets, few do. The town revolves around the prestigious Riversedge Law Club, where deals are made and cases are resolved and where Ingrid DiLaurio - a former lawyer turned nationally recognized podcast host - has never once been made to feel welcome.

When Ingrid’s husband, Peter, is found dead, and Ingrid's former friend, Opal, is arrested as the prime suspect, the press quickly seizes on Opal's past as a single mom and stripper. Ingrid’s first priority is protecting herself and her son, Drake, along with her business, from salacious gossip. But when Opal finds herself in desperate need of a defense lawyer, she tells Ingrid she wants to call in a “favor,” and Ingrid reluctantly returns to the law for one last case.

As the trial unfolds, Ingrid realizes quickly that she has taken on more than she bargained for, including Opal’s dark past, a corrupt judge, a blackmailing prosecutor, another dead body, and a black tinted car that follows her everywhere. Ingrid resolves to do anything to win the case. Anything that is, except tell the truth.

“Along the lines of Big Little Lies … Secrets are rife in Riversedge, and the characters clearly know more than they are letting on. But Impellizeri does a good job of teasing out pieces of the puzzle without readers feeling like they have been cheated … A former corporate lawyer, she writes crackling courtroom drama … this is the auspicious beginning to a series. Grabs the reader from the get-go, a compelling invitation to join the club.” Kirkus Reviews

"Impellizzeri delivers in In Her Defense, intricately weaving a psychological suspense and a gripping legal thriller into one bang of a book. A twisty, winding road of deceit, betrayal, and the extent to which someone will go to conceal the truth. I gobbled it up." Kimberly Belle, internationally bestselling author of Dear Wife & Stranger in the Lake

"A brilliantly crafted and fascinatingly insightful morality tale - an unlikely alliance of two strong women each with a powerful secret that could destroy the other." Hank Phillippi Ryan, USA Today Bestselling author, Mary Higgins Clark and five-time Agatha Award Winner

​​​​​​​"An on the-edge-of-your-seat, can't-put-down-read! In between all the legal maneuverings, Impellizzeri's characters are flawed and poignant, their relationships are multi-layered, and the end is truly both tender and surprising." Kate Moretti, New York Times bestselling author of The Vanishing Year​​​

"IN HER DEFENSE is an intricately plotted, compelling legal drama with heart-and a twist ending that you won't see coming!" Kathleen Barber, author of Truth Be Told (formerly published as Are You Sleeping and now an Apple TV+ series)

I was a corporate litigator for over 13 years. I took a one year sabbatical over a decade ago and I’m still on it! I didn’t actually leave the law to write a book, but as I started to catch my breath and regroup away from my legal career, I reconnected with my first love: writing.

I actually started out as a non-fiction writer and I still write non-fiction. The first book contract I received was for Lawyer Interrupted and I have another non-fiction book coming out later this year, How to Leave the Law, co-written with Harvard grad and former law partner, Liz Brown.

Yes! I do marketing and development work for my kids’ private school, and I’m also an adjunct professor in the Drexel University MFA in Creative Writing program. I feel lucky to have a full plate of creative activities. And I always tell aspiring writers - Don’t quit your day job! It helps take the pressure off as the writing biz is so erratic and unpredictable. By keeping this balance, I feel fulfilled by my writing career rather than stressed about it.

My sisters are my first readers. I trust them to ask questions and help me fill in the blanks in the early stages. For the new Riversedge Law Club Series, my agent, Liza Fleissig, has been instrumental in the early stages as well.

I loved writing the two female characters in this book: Ingrid and Opal. Both are strong women and mothers and both are trying to get their own second chances. I hope readers enjoy these characters as much as I do!

Finalizing Book 2 of the Riversedge Law Club Series - entitled Barr None, a story of corruption, secrets, and murder with Carly Jenner, the law clerk from the trial in In Her Defense, at the center of it all. Readers can get a sneak peek when they purchase the paperback edition of In Her Defense.

To connect with Amy ~ 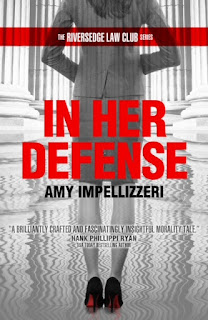 Posted by Jill Hannah Anderson at 9:01:00 AM
Email ThisBlogThis!Share to TwitterShare to FacebookShare to Pinterest