Winter, 1564. Beautiful young Princess Margot is summoned to the court of France, where nothing is what it seems and a wrong word can lead to ruin. Known across Europe as Madame la Serpente, Margot's intimidating mother, Queen Catherine de Médicis, is a powerful force in a country devastated by religious war. Among the crafty nobility of the royal court, Margot learns the intriguing and unspoken rules she must live by to please her poisonous family.
Eager to be an obedient daughter, Margot accepts her role as a marriage pawn, even as she is charmed by the powerful, charismatic Duc de Guise. Though Margot's heart belongs to Guise, her hand will be offered to Henri of Navarre, a Huguenot leader and a notorious heretic looking to seal a tenuous truce. But the promised peace is a mirage: her mother's schemes are endless, and her brothers plot vengeance in the streets of Paris. When Margot's wedding devolves into the bloodshed of the St. Bartholomew's Day Massacre, she will be forced to choose between her family and her soul.

Médicis Daughter is historical fiction at its finest, weaving a unique coming-of-age story and a forbidden love with one of the most dramatic and violent events in French history.


“Perinot matches the rhythm of Margot's life to the political storms: as the battles escalate, so do the perils of love and lust. A riveting page-turner skillfully blending illicit liaisons and political chicanery.”
~~Kirkus Reviews

"This story is an enthralling page-turner which lovers of royalty fiction and strong female leads should enjoy thoroughly."

A Day of Fire: A Novel of Pompeii
Knight Media/November 2014

I wasn’t always a writer. In fact I am not even one of those people who always knew she wanted to be a writer. I do not have stacks of journals under my bed dating to my adolescent days. I’ve always made up stories, mostly for my sister’s entertainment. But when I was a little girl I dreamed of being the junior senator from Ohio—not a novelist. Then I decided that I wanted to be a lawyer and in due course I went off to law school and became one. And that is when I discovered that being good at something doesn’t mean you enjoy it. So my dream job had turned out not to be so dreamy. I knew I wanted to do something new, but deciding what to be when you grow up when you are already grown up is an angst filled business. I don’t do angst without my sister (much as she doubtless wishes I would). So I was on the phone with her using her as an unpaid career counselor/therapist when she said, “I know you are making up a story right now in your head. Whatever that story is pick up your dictaphone and start saying it out loud.” I was leaving on a family beach vacation, but I took my dictaphone along and followed my sister’s orders. The result was my first completed manuscript.

Given that my work day is limited by school hours, when I am not immersed in my research books, drafting or editing I tend to be doing the really exciting stuff like supervising middle-school homework, prepping dinner or running a load of laundry *wink*  I am sure a lot of my readers can identify with this.

How do you get your ideas?

Serendipitously. The inspiration for my debut novel, The Sister Queens came from a footnote in a history of Notre Dame de Paris about Marguerite of Provence (whose kneeling image is carved over that great church’s Portal Rouge) and her sisters. These remarkable 13th century women all made very politically significant marriages yet I had never heard of them. I wondered how they could have slipped through the fingers of history.  The fact that they had seemed utterly unfair.  So, I decided to tell their story myself.  The idea for the manuscript I am working on currently came from a 17th century Italian song that my son and I heard on the car radio.  I think when you are a creative type person you always have feelers out looking for interesting and inspiring oddities.  Historical novelists may have a bit of an advantage here because history is full of the weird, wonderful, and forgotten, all waiting to be re-discovered and illuminated.  It is also full of powerful and sometimes powerfully twisted people. That is certainly true of the Valois royal court which provides the setting for my just-released novel, Médicis Daughter.

Because I write historical fiction a tremendous amount of what makes it into my books really happened.  In order to write convincingly in a particular period and place (in the case of Médicis Daughter the 16th century French Royal Court) I have to steep myself in the period including the details of everyday life. For example, I can tell a Spanish farthingale (an undergarment that supports a 16th century skirt) from a French one, and pretty much put my finger on the year when the style began to change.

Most of what I read and absorb does NOT make it into the text of my book—that would be a boring recitation of fact, not a novel. But it does shape every moment, every description, every scene. Which historical events are ultimately recounted in a particular novel depends on the plot and theme of the story, and also on the point of view from which the story is being told. For example, Médicis Daughter is a coming of age story told through the eyes and experiences of Princess Marguerite de Valois, youngest sister of the French King. She is not included in meetings of the King’s Council so those are not the type of scenes you will find in the book. She is, however, fully immersed in the court intrigue that permeates the household of her royal mother, Queen Catherine de Médicis. So readers can expect a lot of power struggles, seductions etc.

Oddly some of my favorite scenes are also among the most painful in the book. I think that’s because they involve moments of emotional epiphany for my characters—moments when they break through and grow.  Heartbreak, betrayal, life-or-death decisions: these bring out the best and worst in people and, ultimately, how we react under such pressure reveals who we really are.  My heroine, Marguerite de Valois, the youngest of the royal princesses, experiences a tremendous amount of adversity and drama during the span of my book. She is coming-of-age (and trying to understand who she will be as a woman) in a very tumultuous time in French history. The Wars of Religion are raging. Political alliances are tenuous and shifting. There is considerable dysfunction within her family, and she is under tremendous pressure to be obedient to the will of her powerful mother. All of these things present Margot with a stark choice—will she allow circumstances and the will of others to determine who she is (the path of least resistance), or will she attempt to take primary responsibility for who she becomes, even if such self-determination puts her at risk of negative consequences?

Find a community. One of the wonderful things about the internet is that like-minded and like-interested people can find each other across great distances. I’ve been active for some years in the on-line community AgentQuery Connect and I can highly recommend that to writers who have not yet secured an agent.  Another great way to connect with other writers—and to find those all-important manuscript critique partners—is to attend a writers conference or two. As a writer of historical fiction I am a big fan of the Historical Novel society and have been attending their conferences for a decade. This can be a lonely road if you let it become one, but it absolutely does not need to be. In my experience fellow writers are some of the most open-hearted and collegial people around.


Thank you so much, Sophie, for taking the time to tell us a bit about your writing life, and your new novel! 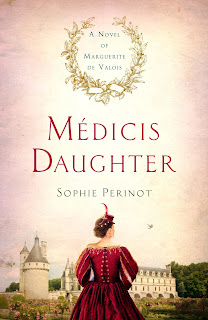 Posted by Jill Hannah Anderson at 7:51:00 AM No comments:
Email ThisBlogThis!Share to TwitterShare to FacebookShare to Pinterest
Newer Posts Older Posts Home
Subscribe to: Posts (Atom)