GLORY OVER EVERYTHING, by author, KATHLEEN GRISSOM ~ debuted April 4th!

A novel of family and long-buried secrets along the treacherous Underground Railroad.


The author of the New York Times bestseller and beloved book club favorite The Kitchen House continues the story of Jamie Pyke, son of both a slave and master of Tall Oaks, whose deadly secret compels him to take a treacherous journey through the Underground Railroad.

Published in 2010, The Kitchen House became a grassroots bestseller. Fans connected so deeply to the book’s characters that the author, Kathleen Grissom, found herself being asked over and over “what happens next?” The wait is finally over.

This new, stand-alone novel opens in 1830, and Jamie, who fled from the Virginian plantation he once called home, is passing in Philadelphia society as a wealthy white silversmith. After many years of striving, Jamie has achieved acclaim and security, only to discover that his aristocratic lover Caroline is pregnant. Before he can reveal his real identity to her, he learns that his beloved servant Pan has been captured and sold into slavery in the South. Pan’s father, to whom Jamie owes a great debt, pleads for Jamie’s help, and Jamie agrees, knowing the journey will take him perilously close to Tall Oaks and the ruthless slave hunter who is still searching for him. Meanwhile, Caroline’s father learns and exposes Jamie’s secret, and Jamie loses his home, his business, and finally Caroline.

Heartbroken and with nothing to lose, Jamie embarks on a trip to a North Carolina plantation where Pan is being held with a former Tall Oaks slave named Sukey, who is intent on getting Pan to the Underground Railroad. Soon the three of them are running through the Great Dismal Swamp, the notoriously deadly hiding place for escaped slaves. Though they have help from those in the Underground Railroad, not all of them will make it out alive.


Normally I do a Q & A here with the author. Unfortunately for me, my blog was down for about a month as I switched my website, and since I wasn't sure when it would be up and running again, I didn't contact Kathleen until last week. I knew she'd be swamped with this debut and her state-to-state book tour. I was exhausted just reading her schedule for the next month!

Kathleen apologized that she wouldn't have time before she left to do the Q & A's, kind as always. This author has been nothing but kind to me from the time I told her how much I loved her first book, THE KITCHEN HOUSE. If you haven't read that book, go order it right now. Go ahead, I'll sit and wait. Done? Okay.

As awesome as her first novel was, Kathleen had to take the bull by the horns and do what she could to get her book into as many readers hands as possible. There is a great Wall Street Journal article about how she made that happen (I posted part of it below), and her work and perseverance paid off big-time. All because Kathleen put her heart and soul into the book, and didn't stop until she did everything she could to get it out to the world. I hope writers find the article below inspiring. And for readers, an author's job is so much more than writing the book.

Initially, Kathleen's next novel was going to be about Crow Mary. After the amazing feedback for THE KITCHEN HOUSE, Kathleen set aside Crow Mary, and picked up Jamie's story from her first novel. His story is now told in this novel, GLORY OVER EVERYTHING (along with a few other characters from her first book.)

I had the pleasure of reading this book ahead of time, when we were on a trip in February. We visited plantations in the south, and they really reiterated the setting I was reading in Kathleen's book.

I hope you enjoy her latest novel and her first book (since you ordered both, right?)

Below is an excerpt from the Wall Street Journal article in 2012:
By STEFANIE COHEN, AUGUST, 2012
It's a breakout hit—two and a half years after it was published.
Kathleen Grissom's debut novel, "The Kitchen House," about life on a Southern plantation, was barely noticed when published by Touchstone, an imprint of Simon & Schuster, in February 2010. With an initial print run of 11,500 copies, the book didn't get traction right away. Bookstores naturally began pulling it from display tables and putting it back in the fiction section, where it seemed destined to languish.
In an era when digital buzz is considered crucial to launching books overnight, it was old-fashioned book-club word-of-mouth that prevailed. Ms. Grissom, who lives near Lynchburg, Va. and used to raise cashmere goats on a farm near there, says she had no grand design when she began to write the novel, which has been compared with "The Help." It features an Irish indentured servant who bonds with slaves in the kitchen house. But when it came to marketing her work, she left nothing to chance.
She sent advance copies to influential book bloggers, asking for a review. If she didn't hear back, she'd bug them again. Eventually, bloggers began to read it and review it—positively. Book clubs, which pay attention to such sites, started contacting Ms. Grissom via her website. She often offered to speak to the club personally, sometimes driving there on her own dime, or to call in to talk to the groups. She estimates that she has spoken to as many as 50 book clubs over two years. She would also arrange for the nearby bookstore to have enough copies to accommodate the members. Word of mouth spread.
"Almost every book club has one or two members who are in another book club, or they have a mother in Chicago or a sister in California, who are also in a book club," she says.
In an era when digital buzz is considered crucial to launching books overnight, it was old-fashioned book-club word-of-mouth that prevailed. The book is in its 21st printing, with 254,000 copies in print and 152,000 e-books sold, the publisher says. It has hit some best seller lists, and in July, giant retailers like Target and Costco began selling it; sales jumped 25%. (Remember, this was 2012 - and her sales have skyrocketed even more since then!) 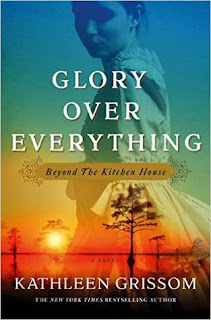 Posted by Jill Hannah Anderson at 6:40:00 AM No comments:
Email ThisBlogThis!Share to TwitterShare to FacebookShare to Pinterest
Newer Posts Older Posts Home
Subscribe to: Posts (Atom)