From the bestselling author of The Marriage Lie and Three Days Missing comes a riveting new novel of suspense about a woman who, in a fight for survival, must decide just how far she’ll go to escape the person she once loved.
Beth Murphy is on the run…
For nearly a year, Beth has been planning for this day. A day some people might call any other Wednesday, but Beth prefers to see it as her new beginning—one with a new look, new name, and new city. Beth has given her plan significant thought because one small slip and her violent husband will find her.
Sabine Hardison is missing…
A couple hundred miles away, Jeffrey returns home from a work trip to find his wife, Sabine, is missing. Wherever she is, she’s taken almost nothing with her. Her abandoned car is the only evidence the police have, and all signs point to foul play.
As the police search for leads, the case becomes more and more convoluted. Sabine’s carefully laid plans for her future indicate trouble at home and a husband who would be better off with her gone. The detective on the case will stop at nothing to find out what happened and bring this missing woman home. Where is Sabine? And who is Beth? The only thing that’s certain is that someone is lying and the truth won’t stay buried for long.


Multiple plot twists keep the reader guessing all the way to the stunning conclusion, and the link between Beth and Sabine comes as one of the book's bigger surprises. Belle once again displays a knack for high suspense. - Publishers Weekly

A woman on the run, a grieving husband, a bereft sister, a brokenhearted lover, a determined detective  - or are they? Nothing is as it seems in Kimberly Belle's, knockout thriller, DEAR WIFE. I tore through the pages of this clever, multi-layered stunner that not even the most astute suspense fan will be able to see what's coming until the final, jaw-dropping twist. Clear your calendar and put DEAR WIFE at the top of your to-be-read list. Five breathtaking stars! - Heather Gudenkauf, New York Times bestselling author of The Weight of Silence and Before She Was Found

Subtle, insidious, clever... DEAR WIFE is spellbinding. I was hooked from the first page. You're going to love Kimberly Belle's latest outing. And you aren't going to see it coming... - JT Ellison, NYT bestselling author of Tear Me Apart

Kimberly Belle's DEAR WIFE is a powerhouse psychological thriller, filled with all the twists and turns of a woman crafting herself a new identity while escaping an abusive marriage. Masterfully written, Belle has outdone herself with this thrilling and emotionally complex tale. This one shines. - Jennifer Hillier, author of Jar of Hearts

I’m not one of those writers who penned her first novel in crayon. Writing was something I always dreamed of doing, but for the longest time, it fell by the wayside for a job that paid the bills. That job for me was nonprofit fundraising, and it definitely helped me hone my writing skills. Fundraising letters, website texts, scripts for meetings and events…I learned very quickly how to drill down to a powerful, poignant message that tugs at the heartstrings.

And then in 2008, the economy crashed and so did my job. By that point, I was pushing forty, and I still hadn’t written that novel I’d always dreamed of writing. I decided to see my sudden unemployment as a now-or-never moment, so I sat down and my computer and….realized I had no idea what I was doing. I spent the next couple of years learning how to build a story. I took courses, read everything I could get my hands on, found some critique partners and mentors, and then I wrote a book and then another. I was almost done with the second story when I attended a local conference and pitched it to a couple of agents—a process kind of like speed dating and just as nerve-wracking. One of them, Nikki Terpilowski of Holloway Lit, signed me by the end of the month, then sold both books to Mira in a 2-book deal. I’ve since moved to Park Row Books, but both imprints fall under Harlequin/Harper Collins, so I haven’t gone very far.

Ideas come from everywhere and nowhere. Sometimes it’s a news snippet or article, like the one about compassionate release that inspired The Last Breath, or a bumpy plane ride that planted the idea for The Marriage Lie.

But sometimes, when you’re really lucky, ideas fall into your lap. Dear Wife was one of those ideas and a gift from the writing gods. I had just spent months putting a proposal together for another story when the idea for Dear Wife woke me up in the middle of the night. My eyes popped open, and the story was right there, fully formed. I knew my characters, the major plot points, how the story began and ended. While the house slept, I stared at the ceiling and watched the story play like a movie in my head. In the morning, I called my editor and pulled the first proposal, then asked for another week or two to throw together a new one for Dear Wife. Thankfully, she loved the story just as much as I did.

Dear Wife is my second book that deals with domestic violence, a subject that was inspired by a dear friend whose backstory is similar to my main character’s in Three Days Missing. When that story opens, she is in the midst of a very messy, very public divorce from a husband who beat her in a very public setting—pretty much exactly what happened to my friend. It’s a fictionalized story crafted around a real-life one, and writing it helped me sort through all the emotions I felt, the sadness and helplessness and anger while watching my friend go through her divorce. I thought I’d worked through all my emotions until the idea for Dear Wife popped into my head, and I realized I had more to say, this time through a woman who is fighting back in the most brave, kick-ass way. Beth is angry and determined and willing to risk it all for her freedom—all the ingredients for the best kind of heroine.

That last scene on the rooftop was my favorite, and probably the easiest to write. I can’t say much about it without giving away a big part of the plot, but I really enjoyed the way Beth’s voice came out so loud and strong. I was channeling her or she was channeling me, I don’t know, but whatever it was, it really worked. That scene flew out of me.

Park Row provides me with a publicist who is a master in getting my books into the right hands, but he has dozens of authors just like me, clamoring for his attention, so I also hire an external publicist to supplement his work. When a book is coming out, I work my contacts, as well, and I purchase Facebook and other ads around publication time. I spend a good chunk of my advance marketing the book, an investment that seems to have paid off.

The biggest advice I can give to any writer is to keep writing. Letter for letter, word for word. Don’t wait for an agent, a publisher, a contract, just keep writing and polishing your craft, every single day. Treat your writing like a job. Set your alarm and go to “work” behind your laptop every day, five days a week, because if you wait for inspiration to strike—or for a story idea to come upon you—you’ll never get anything written. Some days you’ll end with a lot of words, other days you’ll stare at your screen and pull out your hair. In the end, it all evens out, and eventually, you have a book.

I’m currently finishing up a story about a newlywed woman who discovers a woman’s body under their lakeside home dock. The police show up, and in her shock and the pressure of the moment, she follows her husband’s lead and lies about ever having seen the woman—which she did the previous day in passing. It’s not a big lie, and she doesn’t really think much of it at the time, but soon that one little lie turns into an avalanche. As the police close in on the woman’s killer, my main character uncovers dangerous truths about her husband and her marriage, as well as dark secrets that have been simmering below the lake’s currents for years. No title yet, but coming sometime in 2020.


This idea was something I’d been stewing on for ages, a book set in a remote mountain lake town where money plays a big role in the town’s dynamics. My main character’s marriage to an older, wealthier man gives her a rags-to-riches backstory, which reveals unexpected truths about her character. People will break their moral compasses for a host of primal reasons: hate, love, envy, passion, survival—and money.

kimberly s. belle is the USA Today and internationally bestselling author of five novels, including the domestic suspense, Dear Wife (June 2019). Her third novel, The Marriage Lie was a semifinalist in the 2017 Goodreads Choice Awards for Best Mystery & Thriller and her work has been translated into a dozen languages. A graduate of Agnes Scott College, Belle divides her time between Atlanta and Amsterdam. 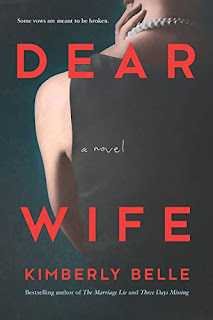 Posted by Jill Hannah Anderson at 7:31:00 AM No comments:
Email ThisBlogThis!Share to TwitterShare to FacebookShare to Pinterest
Newer Posts Older Posts Home
Subscribe to: Posts (Atom)