GIRLS ON THE LINE, by author, AIMIE K. RUNYAN

This fantastic book will be out tomorrow, November 6th!

From the celebrated author of Daughters of the Night Sky comes a stirring novel inspired by the courage, dedication, and love of the unsung heroines of the Great War.

December 1917. As World War I rages in Europe, twenty-four-year-old Ruby Wagner, the jewel in a prominent Philadelphia family, prepares for her upcoming wedding to a society scion. Like her life so far, it’s all been carefully arranged. But when her beloved older brother is killed in combat, Ruby follows her heart and answers the Army Signal Corps’ call for women operators to help overseas.

As one of the trailblazing “Hello Girls” deployed to war-torn France, Ruby must find her place in the military strata, fight for authority and respect among the Allied soldiers, and forge a victory for the cause. But balancing service to country becomes even more complicated by a burgeoning relationship with army medic Andrew Carrigan.

What begins as a friendship forged on the front lines soon blossoms into something more, forcing Ruby to choose between the conventions of a well-ordered life back home and the risk of an unknown future.


“Girls on the Line brings to vivid life the unknown story of American women who served on the front lines of World War I as telephone operators, working under shellfire and exhaustion to keep front-line officers connected during battle. Philadelphia socialite Ruby battles family disapproval to volunteer at the front, finding camaraderie and sisterhood among her fellow operators who risk their lives as much as any soldier and fight to be accepted as soldiers in their own right. Runyan illuminates these little-known women of the past in a moving tale of female solidarity and courage.” —Kate Quinn, New York Times bestselling author of The Alice Network
“A worthy war narrative with a strong, likable female lead and a solid supporting cast.” —Kirkus Reviews

“An intriguing and original novel inspired by the female telephone operators of WWI, Girls on the Line will delight fans of historical fiction. Now is the time for stories about strong, courageous women, and through her heroine, Ruby Wagner, Aimie K. Runyan crafts an absorbing tribute to a group of extraordinary women who played a vital role in the war.” —Hazel Gaynor, New York Times bestselling author

“Once again Aimie K. Runyan shines a much-deserved spotlight on unsung female heroes in history. Set during the First World War, Girls on the Line follows the arduous journey of an army telephone operator forced to navigate a world of codes and spies and the complexities of love. Brimming with strong women who are easy to root for, this story of loyalty and sacrifice make for an inspiring, heartfelt read.” —Kristina McMorris, New York Times bestselling author of The Edge of Lost

“Runyan brings America’s first women soldiers back to life in a heartfelt tale of love, loss, heroism, and war.” —Elizabeth Cobbs, author of The Hello Girls


Tell us a little bit about yourself, and how you started writing.
·       I started writing stories when I was little. I’d take my ancient Mac into the living room and type away while the family watched TV. Obviously, they were dreadful and I rarely finished anything. My English teachers always loved my work, but even by the time I hit middle school, there were enough people pointing out how difficult it was to make a living while writing, that I never pursued it. Finally, when I hit my 30s and I started to care a lot less about public perception and rejection, I finally dove back into a story I’d shelved ten years before. That story would become Promised to the Crown.

What are some things you enjoy when not writing?
·       Musical theater, baking, hiking, spending time with my kiddos, and traveling, just to name a few.

Where do you get your ideas?
·       My first two were inspired by a lecture in a Canadian Civ class 15 years ago, the next two by news articles sent to me by friends, and my WIP was sparked during a conversation with a friend of a friend (now dear friend) who was moving to my area. So it’s pretty much a random run of happenstance.

Is there a particular author or book that influenced or inspired your writing or decision to write?
·       Ken Follett and Philippa Gregory were hugely influential in my writing. They both have the capacity to write beautifully nuanced, dutifully researched books that are still highly readable. That’s always what I endeavor to do.

Can you tell us about your challenges in getting your first book published?
·       It was an unusual time period to write about (Colonial Canada) and with little over-arching tension, like a war. It took a leap of faith from an editor to take it on, and it took the success of my third book to help launch the first into the spotlight.

If you had to go back and do it all over, is there any aspect of your novel or getting it published that you’d change?
·       I would have made one more revision to my debut before taking it on submission. I think more choices would have been available to me if I’d added another layer of polish to my debut. Then again, it would be a completely different book if I wrote it now, and the market has shifted even since 2014 when I signed my first contract, so it’s impossible to know what the outcome would be if I were to do it all over again.

What are you working on now?
·       A tripe timeline WWII family saga. It’s been intense so far! It’s called Across the Winding River and will be out in January 2020.

Is anything in your book based on real-life experiences?
·       Most of Girls on the Line is based on journal entries and correspondence from the real women who served as phone operators in the first world war. Lots of anecdotes repurposed, lots of real events.

Do you have a favorite chapter or scene?
·       I love the scene where Andrew takes Ruby to Joan of Arc’s birthplace. Women warriors have to band together!

Do you have any advice for aspiring writers?
·       Stop aspiring, start writing. Make a schedule that you can stick to and keep to it. Evaluate what you’re doing every so often and make changes to maximize your productivity. That will never involve forgoing sleep or exercise.

Place you’d like to travel?
·       I love to travel, so that changes daily, but at the moment, New Zealand is calling. Would love love love to see those beautiful green hills!


·       Thank you so much for all your support. To be able to share my stories with the world truly is a gift.

To connect with Aimie: 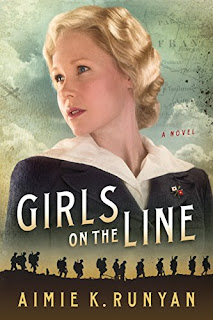 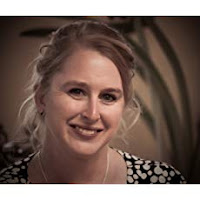