In COAL RIVER, a young woman reveals the dark secrets within a Pennsylvania mining town. In the year 1912, the same year of the sinking of the Titanic, children as young as 5 years old toil 12 hour days under extremely dangerous conditions in Pennsylvania coals mines. Coal River debutes November 24th!

In this vibrant new historical novel, the acclaimed author of The Plum Tree and What She Left Behind explores one young woman's determination to put an end to child labor in a Pennsylvania mining town...

As a child, Emma Malloy left isolated Coal River, Pennsylvania, vowing never to return. Now, orphaned and penniless at nineteen, she accepts the train ticket from her aunt and uncle and travels back to the rough-hewn community. Treated like a servant by her relatives, Emma works for free in the company store. There, miners and their impoverished families must pay inflated prices for food, clothing, and tools, while those who owe money are turned away to starve.

Most heartrending of all are the breaker boys Emma sees around the village--young children who toil all day sorting coal amid treacherous machinery. Their soot-stained faces remind Emma of the little brother she lost long ago, and she begins leaving stolen food on families' doorsteps, and marking the miners' bills as paid.

Though Emma's actions draw ire from the mine owner and police captain, they lead to an alliance with a charismatic miner who offers to help her expose the truth. And as the lines blur between what is legal and what is just, Emma must risk everything to follow her conscience.

An emotional, compelling novel that rings with authenticity-Coal River is a deft and honest portrait of resilience in the face of hardship, and of the simple acts of courage that can change everything.

Praise for the Writing of Ellen Marie Wiseman:
“Captivating in its complexity...the story reaches a place of immense emotional depth and psychological turmoil, culminating in an unexpected, heartrending ending.” – RT Book Reviews, on WHAT SHE LEFT BEHIND, TOP PICK!

“Wiseman eschews the genre’s usual military conflicts in favor of the slow, inexorable pressure of daily life during wartime, lending an intimate and compelling poignancy to this intriguing debut.” – Publishers Weekly on THE PLUM TREE

“A beautifully written first novel...Ellen Marie Wiseman weaves a story of intrigue, terror, and love from a perspective not often seen in Holocaust novels.” – Jewish Book World on THE PLUM TREE

“Screams with authenticity, depth, and understanding.” – The New York Journal of Books on What She Left Behind

Some Q & A time with Ellen:


1.    Tell us a little bit about yourself, and how you started writing.

When my children were small, I wrote for fun and have a drawer full of half-started novels to show for it. Of course I dreamt of finishing a book someday, of being published, of living the “dream”. But writing was just a relaxing hobby, a luxury I afforded myself when I had time. Then, suddenly, the story I knew I had to write came to me. Luckily, by then, my kids had gone off to college and I was able to spend the next four years working on THE PLUM TREE, which follows a young German woman through the chaos of WWII as she struggles to save the love of her life, a Jewish man. It’s loosely based on my mother’s experiences growing up in Germany during the war and features a lot of family history, including my grandmother risking her life to leave food our for Jewish prisoners and my grandfather’s escape from a Russian POW camp.

2.    What are some things you enjoy when not writing?

3. Where do you get your ideas?

When considering possible subjects for a new novel, I like to unearth those parts of history we weren't taught in school. I try to look at historical facts from the perspective of writing about ordinary people caught up in extraordinary circumstances and hopefully making them more interesting and entertaining for my readers. The idea for WHAT SHE LEFT BEHIND came to me when I read about the Willard Suitcase Exhibit, a collection of suitcases found in the attic of the shuttered Willard asylum, left behind by patients who had checked into the institution but never checked out.
The inspiration for COAL RIVER came from my interest in the plight of coal miners, something that was sparked by movies such as “How Green Was My Valley” and “Harlan County USA”. I find it fascinating that men risk their lives every day to make a living by going deep in the earth despite poor wages and the danger of cave-ins and explosions. I can only imagine how hard life must have been in the early years of mining for impoverished mining families, many of whom came to this country from foreign lands in search of a better life. I was struck by the fact that young boys were used to sort coal from the mine, working until their fingers bled. When I realized other people hadn’t heard about the breaker boys either, I knew it was a story that needed to be told. I also wanted to write about the struggles of the breaker boys’ mothers and siblings, the boys who worked as nippers, spraggers, and mule drivers, and the exploitation of miners at the hands of their employers.

I’m working on my fourth novel. Set during the depression-era, it follows an albino whose mother keeps her hidden in the attic for the first ten years of her life, then sells her to a circus sideshow.

Thanks so much, Ellen, for taking the time to share some of your writing life and a bit of your new novel with us! 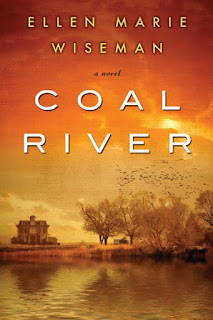