Even the perfect marriage has its dark side…

Iris and Will's marriage is as close to perfect as it can be: a large house in a nice Atlanta neighborhood, rewarding careers and the excitement of trying for their first baby. But on the morning Will leaves for a business trip to Orlando, Iris's happy world comes to an abrupt halt. Another plane headed for Seattle has crashed into a field, killing everyone on board, and according to the airline, Will was one of the passengers on this plane.

Grief-stricken and confused, Iris is convinced it all must be a huge misunderstanding. Why did Will lie about where he was going? What is in Seattle? And what else has he lied about? As Iris sets off on a desperate quest to find out what her husband was keeping from her, the answers she receives will shock her to her very core.

Some Q & A with Kimberly:

Tell us a little bit about yourself, and how you started writing.
I’m not one of those writers who penned her first novel in crayon. Writing was something I’ve always loved in theory, but for the longest time it felt like a pipe dream. Beyond the shaky economics of the profession, writing meant putting myself out there in ways that can be really, really uncomfortable. Writing a story and sending it out into the world is a humbling, unnerving, terrifying thing. Did I really want to roll over and show the world my underbelly? Did I dare?
All that goes to say, I was not a writer for a good part of my career. I worked for more than a decade in fundraising for nonprofits, and though the work was fulfilling, something about it always felt off, like there was something else I was supposed to be doing. As soon as I quit my job and began my first novel, things inside me started to settle. Now that I’ve taken the plunge, I can’t imagine doing anything else.

What are the downfalls of your writing career? The best parts?
For me, there’s nothing greater than spending an entire day in my house alone, with only my dogs and imaginary characters for company. I’m kind of a hermit when I’m writing a story, one of those writers who forgets to do the laundry and cook dinner. It’s why I so love writing retreats, where I can pound out words without having to take care of anyone but myself.
As for the hard parts, I find it incredibly difficult to write the story I’m supposed to be writing, and not what others expect me to write. Once you publish a book, all of a sudden there are editors and marketing departments and reviewers, people talking about what they like and don’t like about your stories. It’s so hard not to let their words and opinions get in your head and mess with your writing mojo. I am constantly reminding myself to be true to my story, because that’s the only way to consistently write a book that’s better than the last.

Is anything in your book based on real life experiences?
I’ve been married for more than twenty years, so I often get asked why I chose to write such a dark story about marriage when my own is so happy and stable. But in any story I write, I like to balance the thrill of the action with emotion, and nowhere is emotion so raw as when falling in love. I relied on my own memories of this time to recreate that heady feeling in my main character, but I took from my present, as well. I know what it’s like to love someone, to believe with everything inside that they are good and true and that they love you back. It’s a part of me that I made a part of Iris, as well.

Do you have any advice for aspiring writers?
The biggest advice I can give to any writer, aspiring or otherwise, is to keep writing. Letter for letter, word for word. Don’t wait for an agent, a publisher, a contract, just keep writing and polishing your craft, every single day. Treat your writing like a job. Set your alarm and got to “work” behind your laptop every day, five days a week, because if you wait for inspiration to strike—or for a story idea to come upon you—you’ll never get anything written. Some days you’ll end with a lot of words, other days you’ll stare at your screen and pull out your hair. In the end, it all evens out and eventually, you have a book.

What are some things you enjoy when not writing?
I am a yoga fan, some might even say a fanatic. For me it’s more than just the physical. It’s about getting grounded, about letting the story go long enough to let my subconscious take over. Especially when I’m stuck, I’ve found that as soon as I let go of the story and get upside down, my plot knots unwind and I figure out how to move forward.

What are you working on now?
My next story is about a botched kidnapping of eight-year old Ethan, who vanishes from a cabin in the North Georgia mountains while on an overnight trip with his second-grade class. At first, police assume his disappearance is an abduction, until another mother receives a mysterious call demanding ransom for her son, a little boy who’s safe at home. Both mothers are thrust in a race to save him, and they’ll find that the greatest dangers are not in the threats of an anonymous stranger, but the everyday smiles of people closer to home.

Kimberly Belle is the author of three novels: The Last Breath, The Ones We Trust, and The Marriage Lie (coming January 2017).
She holds a Bachelor of Arts degree from Agnes Scott College and has worked in marketing and fundraising for various nonprofits, both at home and abroad. She divides her time between Atlanta and Amsterdam. 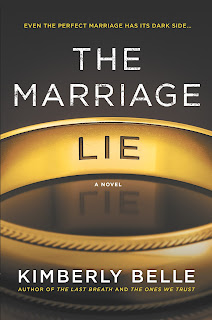