THE PROMISE OF PIERSON ORCHARD, by author, KATE BRANDES

This story is Erin Brockovich meets Promised Land, about a Pennsylvania family threatened by betrayal, financial desperation, old flames, fracking, and ultimately finding forgiveness.
In the novel, Green Energy arrives, offering the impoverished rural community of Minden, Pennsylvania, the dream of making more money from their land by leasing natural gas rights for drilling. But orchardist, Jack Pierson, fears his brother, Wade, who now works for Green Energy, has returned to town after a shame-filled twenty-year absence so desperate to be the hero that he’ll blind their hometown to the potential dangers. Jack also worries his brother will try to rekindle his relationship with LeeAnn, Jack’s wife, who’s recently left him. To protect his hometown and to fulfill a promise to himself, Jack seeks out his mother and environmental lawyer Stella Brantley, who abandoned Minden—and Jack and Wade–years ago.
When LeeAnn’s parents have good reason to lease their land, but their decision leads to tragedy, Jack must fight to find a common ground that will save his fractured family, their land, and the way of life they love.
“An expertly paced, moving exploration of grief and responsibility and an eloquent portrait of a small town struggling with compromise.” — Kirkus Review

I’ve spent most of my career, not as a writer, but as an environmental scientist. Ten years ago I decided I wanted to write fiction, in part, because of the people I’ve met during my career as a scientist.

Early on, I worked as a geologist for six years on water supply and contamination problems deep underground. Then I took a series of jobs over more than a decade that allowed me to use my environmental science knowledge to work on land and water conservation. Along the way, I chose work with a community link so that I could use my science background to serve as a bridge between the technical side of things and my community’s understanding of the problem at hand. My career gave me access to people’s response to problems with the land and water, which was always related to their backstory: their personal history, who they grew up with, emotions, influences, as well as where they came from.

I turned to creative writing as a way to examine people’s feelings about things I care about, drawing on my experiences as a scientist working with communities.  Writing is my way to make sense of the world. If there's a crisis in my life or a difficult decision ahead, I’ve always reached for the pen to figure out what to do. So in order to contemplate some of the bigger societal questions I face daily about changes to the land and natural world around me, I turned to writing fiction to open the conversation within myself, from several viewpoints.

When I started my novel, almost no one had heard of fracking. I was fascinated by it early on because of my experience with looking at water problems deep underground. But also because I’m from a rural area of Pennsylvania, not unlike the rural places where fracking has taken place in this state. I could see the struggle from the rural perspective that I didn’t think anyone was really talking about it. It’s complicated and I wanted to explore it through fiction.

I love the outdoors and spend a lot of time gardening and hiking. I also enjoy running, which is a lot like writing – an endurance sport. Baking is also a hobby of mine, as is reading.

I still work part-time as an environmental scientist for a local conservation organization.

I love the writing of Kent Haruf. I admire his spare style. I’ve been told my writing has a similar quality.

Here’s my publishing story, in case it might help anyone else along the way:
It took seven years from the time I began writing my novel until it was accepted for publication. I waited until I thought it was really ready (after about five years of writing) before I started querying agents.

I’d been querying agents for about two years without much luck. A response I often got was that they liked the book, but didn’t think they could sell it. So I decided the novel might be better suited for a small press and I started to query them directly. I had a lot of rejections and just when I was about to give up and start working on my second novel in earnest, my publisher Nancy at Wyatt-MacKenzie contacted me and said she was interested.

I immediately sent emails to about thirty agents saying I had an interested publisher and I was now seeking agent representation. I had quick response from several agents. I ended up signing with my dream agent, Katie Shea Boutillier at The Donald Maass Agency. She then negotiated the deal with Wyatt-MacKenzie.

My publisher had a hand in helping me develop my marketing plan, but mostly it’s been me. I’ve spent a lot of time talking to everyone I know who’s published before about what I should do. I’ve done this over several months and planned ahead. I’ve been laying the groundwork since last fall for a marketing blitz that began mid-February and runs until mid-May. It includes a book blog tour, speaking at events, blog posts, an Instagram campaign, contests, appearances, etc.

I’m at work on my second novel. It will be another book club fiction novel with an eco-bent. But it’s a completely different story from my first novel.

Just go for it. You’re a writer if you’re writing. If you truly want writing as part of your life, you’ll find a way.

I hope you love my story! But either way, I want to hear your thoughts and would welcome feedback!

An environmental scientist with over 20 years of experience, Kate Brandes is also a watercolor painter and a writer of women’s fiction with an environmental bent. Her short stories have been published in The Binnacle, Wilderness House Literary Review, and Grey Sparrow Journal. Kate is a member of the Arts Community of Easton (ACE), the Lehigh Art Alliance, Artsbridge, the Pennwriters, and the Women’s Fiction Writers Association. Kate lives in a small town along the Delaware River with her husband, David, and their two sons. When she’s not working, she’s outside on the river or chasing wildflowers. The Promise of Pierson Orchard is her first novel. 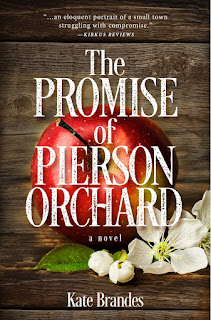