THE EDGE OF LOST, by author, KRISTINA MCMORRIS

On a cold night in October 1937, searchlights cut through the darkness around Alcatraz. A prison guard’s only daughter—one of the youngest civilians who lives on the island—has gone missing. Tending the warden’s greenhouse, convicted bank robber Tommy Capello waits anxiously. Only he knows the truth about the little girl’s whereabouts, and that both of their lives depend on the search’s outcome.

Almost two decades earlier and thousands of miles away, a young boy named Shanley Keagan ekes out a living as an aspiring vaudevillian in Dublin pubs. Talented and shrewd, Shan dreams of shedding his dingy existence and finding his real father in America. The chance finally comes to cross the Atlantic, but when tragedy strikes, Shan must summon all his ingenuity to forge a new life in a volatile and foreign world.

Skillfully weaving these two stories, Kristina McMorris delivers a compelling novel that moves from Ireland to New York to San Francisco Bay. As her finely crafted characters discover the true nature of loyalty, sacrifice, and betrayal, they are forced to confront the lies we tell—and believe—in order to survive.

I was searching online one day when I happened across an intriguing documentary titled Children of Alcatraz. The compilation of interviews featured people who had grown up on Alcatraz Island as children of the prison staff, some even claiming to have secretly befriended notorious inmates despite rules to prevent any contact. By the end of the video, I knew I had a story to tell, one of a hardened prisoner whose acquaintance with the young daughter of a guard would lead to irreversible consequences.

When I researched Alcatraz further, I was just as surprised to learn about an inmate named Elliot Michener. As an entrusted passman, he had been assigned to work in the warden’s mansion, where he later built and tended a greenhouse, and was even granted special permission to work outdoors seven days a week under limited supervision. The paradoxical setting fascinated me: one of a colorful, peaceful haven meant for nurturing and growth, set next to a bleak concrete prison where lives often withered.

During a night tour on Alcatraz, surrounded by the steel bars and cold gray walls of a cell, I gained a sense of appreciation for the cherished respite found in that greenhouse. And when I boarded the boat to leave, I took with me a notepad full of astounding facts about the infamous prison, the inmates who once lived there, and escape attempts that often ended in tragedy.

Kristina McMorris is a New York Times and USA Today bestselling author and the recipient of more than twenty national literary awards, as well as a nomination for the IMPAC Dublin Literary Award, RWA’s RITA® Award, and a Goodreads Choice Award for Best Historical Fiction. Inspired by true personal and historical accounts, her works of fiction have been published by Kensington Books, Penguin Random House, and HarperCollins.

The Edge of Lost is Kristina’s fourth novel, following the widely praised Letters from Home, Bridge of Scarlet Leaves, and The Pieces We Keep, in addition to her novellas in the anthologies A Winter Wonderland and Grand Central. Prior to her writing career, she hosted weekly TV shows since age nine, including an Emmy® Award-winning program, and has been named one of Portland's "40 Under 40" by The Business Journal.

“Kristina McMorris evokes such a strong sense of place that to open her books feels less like reading and more like traveling. Her absorbing new novel…[is an] epic, deeply felt tale of struggle and second chances… a transporting piece of historical fiction.”
— BookPage

“Will grab your heart on page one and won’t let go until the end—and if you’re like me, not even then. I absolutely love this book, and so will you.”
— Sara Gruen, #1 New York Times bestselling author of Water for Elephants

“McMorris’ gripping immigrant saga sweeps from Dublin to New York, through Prohibition and vaudeville, from New York to San Francisco and Alcatraz. It is a young man’s battle with hardship and tragedy, but it is also a portrait of America during a turbulent time and a quest that ends in triumph. Readers will be caught up in this well-told story.”
— RT Book Reviews, 4 Stars

“Compelling, resonant and deeply moving, The Edge of Lost is an absorbing tale of deceit and self-deception, survival and second chances, the ties that bind and the lure of the unknown.”
— Christina Baker Kline, #1 New York Times bestselling author of Orphan Train

Some Q & A with Kristina:

Well... I'm a married mom of two boys, ages 9 and 12, both of whom I’ve successfully brainwashed into loving nostalgic tunes (spanning from Motown to the Rat Pack) and classic movies like, yes, The Sound of Music. As a native of Portland, Oregon, I don’t mind the rain a bit and am not even sure I own an umbrella. As for my heritage, I’m of Irish and Japanese descent, a confusing mix that should explain a lot about me.

2.    How did you start writing fiction?

Just a handful of years ago, I was actually interviewing my grandmother for the biographical section of a homemade cookbook, intended simply as a Christmas gift for the family. That’s when she shared how she and my late grandfather had only dated twice during WWII, before an exchange of letters led to a marriage that lasted until he passed away fifty years later. She then shocked me by puling from her closet every courtship letter he’d ever sent to her. We spent the rest of the afternoon poring over those gorgeous, yellowed, wrinkled pages, all sent from an eighteen-year-old sailor who didn’t know if he’d ever be coming home.

When I left her house, I started to wonder how well two people could truly know each other through letters alone. What if the words on those pages weren’t entirely truthful? It was this idea that led me to sit down and try my hand at a novel, which ultimately became my first book, Letters from Home.

So far, I’ve been fortunate enough to stumble upon lesser-known nuggets from history that are so fascinating I couldn’t wait to share them with others: everything from women on the frontlines in the Pacific Theater and non-Japanese spouses who lived voluntarily in internment camps to Nazi saboteurs who were dropped off by U-boat on the east coast of America and, most recently, children who grew up on Alcatraz Island, supposedly even befriending some of the country’s most notorious criminals.

4.    Is there a particular author or book that influenced or inspired your writing or decision to write?

My first publishing contract was for a total of two books. Given all the months I’d spent researching WWII, and feeling the pressure of getting the facts right, I was very tempted to write a contemporary story for my second novel. But then I read Water for Elephants. I was completely swept into another era, all while learning about an incredible slice of history that I’d had no idea existed. I realized then how much I wanted to offer readers a similar experience, so I’ve continued to write historical fiction ever since.

5.   Can you tell us about your challenges in getting your first book published?

I'm embarassed to admit that I wasn’t much of a reader before I started writing my first novel. (Believe me, I’ve since seen the error of my ways!) Instead, I was a long-time movie buff, so I’ve always loved the art of storytelling, just in a different form. So, my first challenge was crash coursing everything I possibly could about the writing process.

The other great challenge I faced when I first finished writing Letters from Home was the era I’d chosen. I tell you, if I had a dime for every time someone told me “Oh, World War Two will NEVER sell”…. Needless to say, I’m thrilled the appeal of WWII novels soon took a turn and continues to be so popular among readers.

6.    Is anything in your latest book, The Edge of Lost, based on real-life experiences?

In addition to the experiences of children who grew up on Alcatraz, I loved weaving in true stories from inmates on the Rock, ranging from dark and shocking to humorous and touching. I was especially surprised to learn about entrusted inmates known as “passmen,” who were given special assignments to work at the warden’s mansion, as well as outdoors seven days a week under limited supervision.

A good portion of the novel also involves Prohibition, mobsters, Italian and Irish immigrants, and even the vaudeville and burlesque circuits. As you can imagine, researching these subjects provided plenty of other interesting tidbits that found their way into my story.

7.    Do you have any advice for aspiring writers?

When it comes to constructive criticism, try your best to lower your defenses and listen with open ears, but treat feedback like a cafeteria line: pick and choose what works for you. Don't let anyone edit out the voice that is uniquely yours.

Above all, remember there’s no finish line in this crazy business. So, regardless of what people say will or won’t sell, write a story you’re passionate about.

Thank you so much, Kristina, for taking the time to share some of your writing life with us! Jill 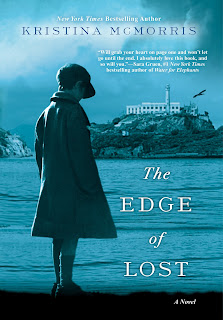