THE NURSE'S SECRET, (out June 28th!) by author AMANDA SKENANDORE

The unflinching, spellbinding new book from the acclaimed author of The Second Life of Mirielle West. Based on the little-known story of America’s first nursing school, a young female grifter in 1880s New York evades the police by conning her way into Bellevue Hospital’s training school for nurses, while a spate of murders continues to follow her as she tries to leave the gritty streets of the city behind…

Based on Florence Nightingale’s nursing principles, Bellevue is the first school of its kind in the country. Where once nurses were assumed to be ignorant and unskilled, Bellevue prizes discipline, intellect, and moral character, and only young women of good breeding need apply. At first, Una balks at her prim classmates and the doctors’ endless commands. Yet life on the streets has prepared her for the horrors of injury and disease found on the wards, and she slowly gains friendship and self-respect.  Just as she finds her footing, Una’s suspicions about a patient’s death put her at risk of exposure, and will force her to choose between her instinct for self-preservation, and exposing her identity in order to save others. Amanda Skenandore brings her medical expertise to a page-turning story that explores the evolution of modern nursing—including the grisly realities of nineteenth-century medicine—as seen through the eyes of an intriguing and dynamic heroine.
“A spellbinding story, a vividly drawn setting, and characters that leap off the pages. This is historical fiction at its finest!” —Sara Ackerman, USA Today bestselling author of The Codebreaker’s Secret
Author interview with Amanda ~

How do you start your day (a routine of sorts?)

Ideally, I get up, spend a few minutes meditating or practicing yoga, brew a cup of tea, and then start writing. And sometimes, I really do start my day this way. There are many mornings, however, that I’ll pick up my phone and start scrolling before I’m even out of bed. Then I’ll get sidetracked by the dirty dishes in my sink (or the clean dishes in my dishwasher waiting to be unloaded). I’ll scroll a little more, then brood for a while over all the time I’ve wasted, then finally start writing. Basically, my routine is a work in progress.

Finish this: “I can’t write without…”

I can’t write without a window. It doesn’t have to be right in front of me but somewhere in sight. If I’m writing outdoors, no window required. In either case, a cup of tea is nice to have on hand too.

Matches and a water desalinator. My imagination can do the rest.

In addition to being a writer, I work part-time as an infection prevention nurse at a local hospital. I enjoy being able to use different skills and other parts of my brain when I’m there. It helps me feel connected to my community in another way too.

Do you have a manuscript(s) in your drawer? If so, will it ever see the light of day?

Yes! The first book I ever wrote never made it beyond the second draft. It was a great learning experience, though. It was a historical fantasy novel about an outsider searching for clues about her past. (All my books seem to circle around this idea of belonging...) I queried a few dozen agents with the manuscript, but after hearing their feedback (or lack thereof), I realized the story needed a lot more work. By then, I’d already fallen in love with the idea for my next novel. So I put that first manuscript away and started on my next (which would eventually become BETWEEN EARTH AND SKY, my first published book). Fun as it was to write, I don’t think that first manuscript will ever see the light of day.

An archeologist, a museum curator, a librarian, or a cheesemonger.

When I was starting out, I joined a critique group of five other local writers. What a difference it’s made in my life and my career! The group has helped me grow as a writer and supported me on the long path to publication. These women are not only fellow creators but dear friends. Over the years, we’ve lost a few members and gained others, but they’re always my go-to readers when I finish the rough draft of a manuscript. I know they’ll be honest, insightful, and encouraging.

I’ve just begun working on my next novel about a wily medicine show woman and her band of misfit performers who find themselves in Galveston, Texas during the most devastating hurricane ever to strike the U.S.

In most of my books, my favorite character is one of the secondary characters—the sidekick or love interest or best friend. But in THE NURSE’S SECRET, Una, the main protagonist, is my favorite. She’s a slum-dweller and pickpocket extraordinaire. From an early age, she’s had to fend for herself, and that’s made her scrappy and self-reliant. But also mistrusting. She becomes a nurse trainee at New York City’s infamous Bellevue Hospital to throw off the police and finds herself in a world unlike anything she’s known. What I liked most about writing Una’s story and what makes her so special is the way she’s able to use her courage and street smarts to get by at the hospital while also learning there’s more to life than survival.

Being a nurse myself, I was curious to explore the profession’s early history. Today, it’s among the most trusted professions, but that wasn’t always the case. Until the late nineteenth century, nurses were untrained and often illiterate. Creating a fish-out-of-water character like Una helped me approach that history in a more playful and relatable way.

Research is a big part of my writing process. Thankfully, it’s one of the parts I love the most. When I was writing THE UNDERTAKER’S ASSISTANT interviewed the county corner to get a better sense of what it was like to work with the dead. For THE SECOND LIFE OF MIRIELLE WEST, I spent several days at Carville (the site of the former National Leprosarium) researching in their archives.

Back in time! That’s why I write historical fiction. But, assuming we’re sticking to the present day, I’d love to visit Turkey and Egypt. I’m also always thrilled to travel to the ocean—any ocean. My dream writing retreat would be a cottage by the sea.

Thank you! Getting to know my readers is one of the very best parts of being a writer. Once a book is published, it belongs as much to the reader as it does to the author. It’s a delight to share the journey with you!

To connect with Amanda: 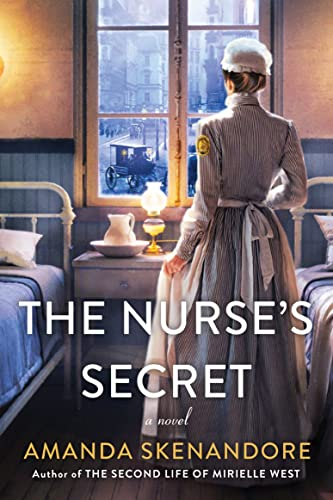 Posted by Jill Hannah Anderson at 8:26:00 AM
Email ThisBlogThis!Share to TwitterShare to FacebookShare to Pinterest