THE WAY WE WEREN'T, by author PHOEBE FOX

This debuts November 9th, and is an Amazon pick for November! 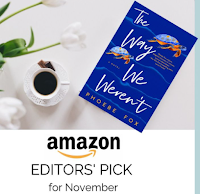 An unlikely friendship between a septuagenarian and a younger woman becomes a story of broken trust, lost love, and the unexpected blooming of hope against the longest odds.

"You trying to kill yourself, or are you just stupid?" Marcie Malone didn't think she was either, but when she drives from Georgia to the southwestern shore of Florida without a plan and wakes up in a stranger's home, she doesn't seem to know anymore. Despondent and heartbroken over an unexpected loss and the man she thought she could count on, Marcie leaves him behind, along with her job and her whole life, and finds she has nowhere to go. Herman Flint has seen just about everything in his seventy years living in a fading, blue-collar Florida town, but the body collapsed on the beach outside his window is something new. The woman is clearly in some kind of trouble and Flint wants no part of it—he's learned to live on his own just fine, without the hassle of worrying about others. But against his better judgment he takes Marcie in and lets her stay until she's on her feet on the condition she keeps out of his way. As the unlikely pair slowly copes with the damage life has wrought, Marcie and Flint have to decide whether to face up to the past they’ve each been running from, and find a way to move forward with the people they care about most.
Reviews ~
"A story of the reassessment of the lives of two unlikely strangers who meet--an old man and a young woman--who together discover that the place in life they have chosen for themselves does not bring the fulfillment they had worked to have.  An insightful and compelling read of the courage to change horses in midstream to reach the shore of new beginnings.”—Leila Meacham, New York Times bestselling author of Dragonfly"Phoebe Fox simply keeps getting better. Her latest The Way We Weren’t is so deeply satisfying on every level that it will continue to resonate with you long after you turn the page on one of the most exquisitely perfect endings you are likely to encounter in some time. As finely wrought as all of Fox’s characters are, special mention must be made of how fully and lovingly  she brings the Gulf Coast of Florida to life. The Way We Weren’t  is exactly the beach-trip-in-a-book that you are yearning to dive into right now.  An achingly artful portrayal of love lost and love reclaimed."—Sarah Bird, author of Daughter of a Daughter of a Queen"Fox’s sharp storytelling will endear Marcie and Herman to readers, and a solid support cast (especially bar owner Darla) adds some heft. It’s a simple story, but the author gets it just right."—Publishers Weekly
Some Q & A with Phoebe ~

What did you think you’d be when you became an adult?

I’ve always written, from the time I learned how to write, but I didn’t think it was something you could make a living at until I became a features journalist and entertainment reviewer, in my thirties.

When I was younger I thought I’d be a psychologist. Later I wanted to be--and was, for many years--an actor. The connective tissue of those careers—what I realize I really wanted to do all along—was figure out why people did what they do, to tell their stories.

What is something about you that people would surprise people?

I’m six feet tall! Especially in the era of Zoom and social media I always forget that’s unusual for a woman (especially living in Texas) until I meet people in person, and invariably the first thing out of their mouths is: “You’re so tall!”

I’ve been a book editor for the last thirty years, and I think I’m the luckiest person on the planet to do what I love most for a living. Now I don’t just get to tell my own stories--I’ve gotten to help thousands of authors tell theirs too.

Almost always it’s inspired by something in my life that suggests some “nut” I want to crack—something I’m trying to work through or figure out for myself.

For my first book, The Breakup Doctor, I’d had a very out-of-character reaction to a guy I’d been dating suddenly ghosting me after a very ardent courtship. I am usually cool as a cucumber in situations like that (my friends called me the breakup ninja), but this time I catastrophized it. I wanted to write about what happens when someone who advises people about moving past their breakups falls apart after a bad one of her own.

(BTW, that guy is now my husband, and he would like everyone to know that he did not in fact disappear, but went to a “no phones/no internet” yoga retreat for a week, which he’d told me about in advance, and called me from the airport en route both to and from the place.)

For my last book, A Little Bit of Grace, I wondered how you could forgive the unforgivable with someone you loved. For The Way We Weren’t, I wanted to explore what might happen in a relationship after a foundational breach that seems insurmountable. I seem to write a lot about family and forgiveness, in various permutations.

Yes, please--authors, take note! I got my agent after 113 queries. With my first submitted manuscript we got a full round of publisher rejections on it, followed by another full round of rejections on a second manuscript. I did a major overhaul of the first manuscript (reworking and rewriting all but one scene), and we finally found a publisher for it, which turned into a four-book series.

Then I pulled my fifth book from the publisher before publication, worrying my writing career was over—till my wonderful agent Courtney Miller-Callihan submitted it elsewhere and we got a two-book deal with Berkley/PRH, a dream publisher for me.

Everything in this crazy career is a challenge. Know that going in and understand what an author friend of mine was kind enough to share with me early in my career: What separates published authors from unpublished ones often comes down to persistence.

Last May I released a book for authors on how to edit their own work, Intuitive Editing (under the name Tiffany Yates Martin), based on my thirty years working as an editor in the publishing industry. I’m currently working on the first of a series of follow-up books for it that dive deeper into specific areas of craft.

In The Way We Weren’t there’s a party scene, and things get…well, a little wild. Now, I’m the farthest thing from a cool, hip party chick, so I had to call a good friend of mine who is much more savvy about such things and have her talk me through an Ecstasy trip. I have no idea if it’s true to life, but if it’s as much fun to actually do it as it was to write about it, I get the appeal. 😊

In the Way We Weren’t, Darla, the beef jerky of a woman who owns the run-down beach bar where Marcie winds up working, just kills me in every scene. I would love to meet her.

What would your job of choice be if you didn’t write books?

I’m doing it--I love helping authors bring their vision to life on the page as an editor.

Please, please put this interview down and go watch I Love You, Man right this minute. You can thank me later.

Just thanks, with all my heart. Readers are the reason we do this—to share our stories, and they don’t come fully to life until they’re in readers’ hands.

And thank you, Jill, for inviting me to share some of my writing life with your readers!

Phoebe Fox, a former journalist and actor, is the author of A Little Bit of Grace; the Breakup Doctor series; and—as Tiffany Yates Martin—of the bestselling nonfiction Intuitive Editing: A Creative and Practical Guide for Revising Your Writing. Her most recent novel, The Way We Weren’t, releases November 9 from Berkley/PRH. Visit her at https://phoebefoxauthor.com.

To connect with Phoebe: 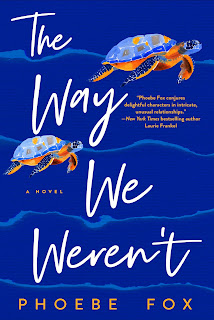 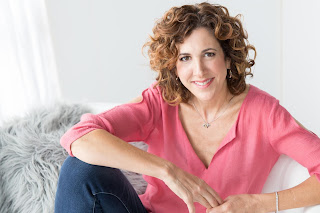