WAITING FOR THE NIGHT SONG, by author JULIE CARRICK DALTON

A startling and timely debut, Julie Carrick Dalton's Waiting for the Night Song is a moving, brilliant novel about friendships forged in childhood magic and ruptured by the high price of secrets that leave you forever changed.

Cadie Kessler has spent decades trying to cover up one truth. One moment. But deep down, didn’t she always know her secret would surface?An urgent message from her long-estranged best friend Daniela Garcia brings Cadie, now a forestry researcher, back to her childhood home. There, Cadie and Daniela are forced to face a dark secret that ended both their idyllic childhood bond and the magical summer that takes up more space in Cadie’s memory then all her other years combined.Now grown up, bound by long-held oaths, and faced with truths she does not wish to see, Cadie must decide what she is willing to sacrifice to protect the people and the forest she loves, as drought, foreclosures, and wildfire spark tensions between displaced migrant farm workers and locals. Waiting for the Night Song is a love song to the natural beauty around us, a call to fight for what we believe in, and a reminder that the truth will always rise.
Amazon.com Editors' pick:
This debut novel, which tackles issues as broad as climate change and racism, will rightly be compared to Delia Owens’ Where the Crawdads Sing. Waiting for the Night Song has the lyricism of a poem and the pacing of a thriller. Dalton is a writer to watch."—Sarah Gelman, Amazon Editor

"Both a timely and timeless literary mystery, Waiting for the Night Song is as seductive as it is smart, blending the allure of Julie Dalton's beloved rural New Hampshire setting with the dark undercurrents of a community's racial divisions and betrayals. This is a story of love, of home, of friendship and family, of a childhood's innocence and an adult's comeuppance, all of which are in the line of fire in this beauty of a page turner." --Michelle Hoover, award-winning author of Bottomland and The Quickening.

"Human nature clashes with Mother Nature in this riveting and heartbreaking coming of age story - - gorgeously written, and wonderfully told . With its combination of powerful themes and intensely immersive setting, fans of Delia Owens will swoon to find their new favorite author. A phenomenal debut!" --Hank Phillippi Ryan, award-winning author of The First to Lie

Q & A with Julie ~
Tell us a little about yourself and how you started writing.

I’ve always written stories and poetry as a hobby. I used to write puppet show scripts and fan fiction scripts of Wonder Woman and Mork and Mindy TV shows as a kid. But I also really loved science and chose Biochemistry as my major when I went to college. Sophomore year, I stumbled into a journalism class and changed course. I continued dabbling in fiction on the side while working as a newspaper and magazine journalist for more than a decade.
I earned a Master’s in Creative Writing in 2005 and that’s when I started taking fiction seriously. I got involved with several writers’ groups and committed to writing a novel. Once I made that mental commitment, I never considered giving up. I think I’ve always been an author. I just didn’t realize it until later in life. Now, I run a small farm and I just finished a certificate program in sustainable agriculture. My love of science and writing finally found a way to coexist and the result is Waiting for the Night Song.

I love to grow things! I own a small farm in rural New Hampshire, which happens to be the setting for Waiting for the Night Song. I grow apples, peaches, berries, corn, potatoes, tomatoes, and tons of other veggies. I love watching the plants grow. Every single year it seems like a miracle.

Most of my ideas grow out of small things I notice in nature. I like to look at the tiny elements most people might not notice and imagine all the ways they could have big, unexpected impacts.

I’m a huge Barbara Kingsolver fan. I love her novels, especially Flight Behavior and The Poisonwood Bible. Her memoir Animal, Vegetable, Miracle also had a huge impact on me. It tells the story of her family living on their farm and growing their own food for a year. I read it right before I built my own farm. I found inspiration in her personal story as well as in her fiction.

I built my farm and raised four kids during the same years I was writing Waiting for the Night Song. All of those major life events are tangled up in my memory. There are parts of the book that were inspired by my children when they were younger, and parts of the story that grew out of phenomenon I observed on my farm. Doing all of that at the same time certainly slowed down my writing process. I had so little time. But, It wouldn’t have been the same book if I hadn’t been knee-deep in parenting and farming. As much as they hindered my writing, they also made it possible.

To be completely honest, I wouldn’t change a thing. It took me a long time to write and publish that first book, but everything I learned and every person I met along the way made it completely worth it. I found an amazing writing community. I signed with my dream agent, and, although it took a long, painful year to sell my book, I landed with the perfect editor who shared my vision for my book and helped me shape it into a better version of the story it was meant to be. No regrets. None.

I have another book coming out in 2022 called THE LAST BEEKEEPER. It’s another stand-alone novel with themes related to nature and climate change. I’m still revising the manuscript, but so far I’m pretty excited about how it’s coming along.

When my four kids were younger, I used to take them canoeing and we would pick blueberries from wide swaths of open shoreline. As the kids got older they started asking whose land it was and if we were stealing the berries. The truth was, I had no idea who owned the land. There were no houses nearby, and I didn’t think anyone would mind some children taking a few handfuls of berries from a canoe. But my kids pressed me on it and I found myself inventing excuses to justify why it was okay to take the berries. Don’t take all the berries from any one bush. Don’t pick berries from a bush with a birds nest. Taking a few handfuls of blueberries on wide open shoreline was a benign action. No one else would have picked those berries. No one would have miss them. But was I teaching my kids it was okay to rely on manufactured rules to justify behavior that was not justifiable, even if it seemed benign? Those rules I invented became the basis for The Poachers’ Code, a code of ethics the characters in my book create to shield themselves from their own questionable actions. I pushed my characters to an extreme limit and forced them to tackle the ethical questions I wrestled with while picking berries with my kids – but with life-and-death stakes.

I’m really attached to the opening of Chapter Two where we meet my main character Cadie as a young girl. She sneaks out of her house early in the morning and jumps off the pier into the lake to rescue a drifting rowboat. This is the scene that sets everything else – the good and the bad – in motion. It’s the moment Cadie will always look back on and wonder: What if I had never jumped in the water? I like this scene because it reminds me of the fearlessness I had as a kid. This was one of the very first scenes I wrote. As I was writing it, I had no idea what Cadie was going to find in that boat. It was a mystery to me too.

I do! I love Sal, the daughter of Cadie’s childhood best friend. In the book, Sal is thirteen. She is bold, fearless, outspoken, and has an enormous heart. I absolutely adore her.

I love to travel! I have a long bucket list of places I’d like to visit. The top four are: 1) My husband and I plan to walk El Camino in Spain together in the near future. 2) I want to see the Northern Lights. I’m not sure where we will go to see them, but I’m thinking about The Lapland region in Norway. 3) Patagonia! I want to see everything in Patagonia. I want to ski, visit vineyards, and hike. 4) Morocco. So much I want to do! Spice markets, desert tours, and the fabrics! I think I’ll probably come home with suitcases full of fabric.

Just thank you! I spent thirteen years writing this book. It still feels a bit surreal that it’s finally out in the world. Every single time a reader reaches out to share a picture of my book or tell me they enjoyed it, I get a rush of gratitude. It means so much to me that readers are willing to invest their time and money to read my story. It’s an incredible honor.

BIO  ~   Julie Carrick Dalton’s debut novel WAITING FOR THE NIGHT SONG has been named to Most Anticipated 2021 book lists by several platforms including CNN, Newsweek, USA Today, Parade, and Buzzfeed, and is an Amazon Editor’s Pick for Best Books of the Month in January. As a journalist, Julie has published more than a thousand articles in publications including The Boston Globe, BusinessWeek, The Hollywood Reporter, The Chicago Review of Books, and Electric Literature. A Tin House alum, and graduate of GrubStreet’s Novel Incubator, Julie holds a master’s in literature and creative writing from Harvard Extension School. She is the winner of the William Faulkner Literary Competition and a finalist for the Siskiyou Prize for New Environmental Literature and the Caledonia Novel Award. She is a member of the Climate Fiction Writers League and is a frequent speaker and workshop leader on the topic of Fiction in the Age of Climate Crisis. Mom to four kids and two dogs, Julie also loves to ski, kayak, and hike.

To connect with Julie ~ 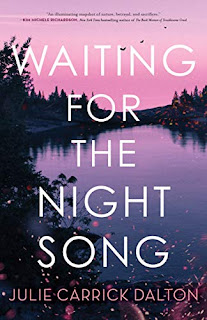