EVERY NOW AND THEN, by author LESLEY KAGEN

For fans of Where the Crawdads Sing and This Tender Land comes a heartfelt story about three young girls searching for adventure during the summer of 1960 from the New York Timesbestselling author of Whistling in the Dark.

That summer would change us . . . forever.The summer of 1960 was the hottest ever for Summit, Wisconsin. For kids seeking relief from the heat, there was a creek to be swum in, sprinklers to run through, and ice cream at Whitcomb's Drugstore. But for Frankie, Viv, and Biz, eleven-year-old best friends, it would forever be remembered as the summer that evil paid a visit to their small town--and took their young lives as they'd known them as a souvenir. With a to-do list in hand, the girls set forth from their hideout to make their mark on that summer, but when three patients escape from Broadhurst Mental Institution, their idyllic lives take a sinister turn. Determined to uncover long-held secrets, the girls have no idea that what they discover could cost them their lives and the ones they hold dear.Six decades later, Biz, now a bestselling novelist, remembers that long ago summer and how it still haunts her and her lifelong friends in Every Now and Then, a story about the ties that bind us, the timelessness of grief and guilt--and the everlasting hope for redemption.
Praise for Every Now and Then:
“Kagen skillfully spins a nostalgic tale...This fast-paced and suspenseful outing will captivate Kagen’s fans and do much to win her new ones.”—Publishers Weekly, starred review"Kagen thoughtfully captures the spirit of '60s small-town America, showing both the idyllic, rosy past that inspires nostalgia and its troubling underbelly."—Booklist“A complete winner. It reminded me of the best parts of To Kill A Mockingbird, and the wonderful friendship displayed by Kate DiCamillo’s three amigos in the Raymie Nightingale trilogy. Filled with all the charm of a 1960's small town, Every Now and Then also tackles issues of racism, homophobia, and gender that are topical today. Biz, Frankie, and Viv are sure to steal any reader's heart.”—Pamela Klinger-Horn, Excelsior Bay Books"Filled with secrets, lies, and all the truth of what is to be human, especially in a small town, Every Now and Then is a story every heart will embrace.”—William Kent Krueger, New York Times Bestselling Author of Ordinary Grace and This Tender Land“With a grace reminiscent of Pat Conroy’s The Prince of Tides, Lesley Kagen paints a tragic and evocative of a childhood summer disrupted by tragedy in 1960s Wisconsin...Both a memorable coming of age tale and suspenseful page-turner. Longtime and new fans of Kagen will delight!”—Pam Jenoff, New York Times bestselling author of The Lost Girls of Paris

Q. Tell us how you started writing.

A. I can’t remember a time when I wasn’t dreaming up a story and putting it down on paper. I still have the silver dollar I won in fourth grade in St. Sebastian’s all-school poetry contest. Growing up in a tough, blue collar neighborhood in Milwaukee, I was a pretty cagey kid and this being a Catholic school, I figured out early on that the more times I could mention God in the poem the better my chances were of winning.

Q.  Where do you get your ideas?

A. I admire writers who dream up stories set in in the 17th century or are inspired by the news, but that’s not me. My characters, settings, and the issues that are important to me—keeping kids safe, mental health, racism, love, and injustice—are based on my experiences, most especially my childhood.

Q. Have you always earned your living writing?

A. Kind of. My first big job out of college was as a DJ in Milwaukee, and I wrote a ton of features and commercials. After I moved to LA in the seventies, I wrote and voiced thousands of radio commercials for a huge retail record chain called Licorice Pizza and many others, but I also began acting on camera. Because I was lucky to have been born with one of those non-offensive Midwestern faces that were so popular at the time, I was cast as “the mom” or “best friend” or “wife” in loads of TV spots. I also guest-starred in a couple of sitcoms— “Laverne and Shirley” and “Bad News Bears.” It was incredibly fun and exciting, but I wanted to be a mom, and raise my kids in , so that’s what we did. I wrote in my journal every day and composed lots of irate letters, but it wasn’t until the loves in my life went to school that I found the time to write my first novel—“Whistling in the Dark.”

Q. Could you tell us a little about the challenges of getting it published?

A.  I love to tell this story with the hope that it might inspire another writer. After I completed the manuscript, I was so nuts about it that I thought it’d be a breeze to find a literary agent to represent it. (Laughing my head off here at how little I knew.) So I came up with what I thought was a pretty decent query letter and sent it off. I was told over and over that it wasn’t very good and that it would never sell. 156 times to be exact! The rejections were so brutal that I almost gave up. Thank God, I didn’t, because I did eventually find an agent. He ended up selling “Whistling in the Dark” to Penguin. Not for a million dollars, the way I thought he would. (Laughing even harder now.) The advance was so small that I remember thinking at the time that they’d only bought it as a tax write-off. Of course, as publication day rolled around, my expectations were set very low, but then my editor started calling me. She started out each conversation with, “You’re not going to believe this, but . . .”

To date, “Whistling in the Dark” is in its 17th print, has sold over 200,000 copies, and was a New York Times bestseller. So, if you’re a writer who is thinking of throwing in the towel—don’t. Believe in your story, believe in yourself, don’t pay attention to the rejections, and someday, you, too, will have the chance to sing, “Nah nah nah nah nah nah” to all the naysayers.

Q. Is there anything else you’d like to add?

A. I’d really want thank all the readers and book clubs who’ve supported me throughout the years. So many of them have become dear friends and I can’t wait to hear what they have to say about “Every Now and Then.” Here’s hoping they love the “tree Musketeers” as much as I do, which would be a lot. Really, really a lot. 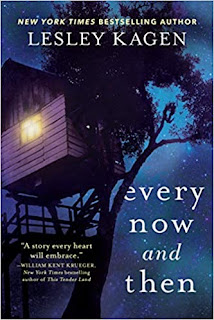