WOMAN ON THE EDGE, by author, SAMANTHA BAILEY (debuts in the U.S. on March 3rd!)

A moment on the subway platform changes two women’s lives forever—a debut thriller that will take your breath away.
A total stranger on the subway platform whispers, “Take my baby.”
She places her child in your arms. She says your name. Then she jumps...
In a split second, Morgan Kincaid’s life changes forever. She’s on her way home from work when a mother begs her to take her baby, then places the infant in her arms. Before Morgan can stop her, the distraught mother jumps in front of an oncoming train.
Morgan has never seen this woman before, and she can’t understand what would cause a person to give away her child and take her own life. She also can’t understand how this woman knew her name.
The police take Morgan in for questioning. She soon learns that the woman who jumped was Nicole Markham, prominent CEO of the athletic brand Breathe. She also learns that no witness can corroborate her version of events, which means she’s just become a murder suspect.
To prove her innocence, Morgan frantically retraces the last days of Nicole’s life. Was Nicole a new mother struggling with paranoia or was she in danger? When strange things to Morgan, she suddenly realizes she might be in danger, too.
Woman on the Edge is a pulse-pounding, propulsive thriller about the lengths to which a woman will go to protect her baby—even if that means sacrificing her own life.

Some Q & A with Samantha ~
Tell us a about yourself and how you started writing.

I wrote and submitted my first book when I was ten years old. It Freddy the Flame, and I thought it was awesome. Apparently not, though, because it with a very sweet note. But a lifelong passion was born, and I haven’t stopped writing since. But it wasn’t until I did my Master in Applied Linguistics that I attempted a full-length novel. After taking a course on imagination, in which one was to create a character, I felt the compulsion to sit down and type. had just finished reading Jennifer Weiner’s fantastic debut, Good in Bed, and that book gave me the courage it. In fact, my best friend and I set out to write a novel together, but she was in law school and didn’t have quite the same obsession for writing as I did. She’s become a very successful lawyer and now reads all my books.

I love reading so much and watching TV. Those are my pleasures. I also enjoy and hanging out and laughing with my loved ones. Oh, and singing karaoke in a room with friends where no one else can hear us.

I’m a freelance manuscript editor. I absolutely love helping other authors polish their beautiful work, and I learn so much from them and the process. It gives me the opportunity to better in on my writing, and I also really understand how invaluable critical feedback is.

Ha ha! This would take a whole book itself. In a nutshell, I’ve had two agents and have written five books in a seventeen-year span. My first two books, which were rom-, didn’t sell traditionally I self-published one of them. It was one of the best decisions I’ve ever made because it introduced me to an incredible community of writers, bloggers, and readers. But I always wanted to I kept going, book after book after book, until it happened with Woman on the Edge. I am very, very lucky.

I don’t think so. I learned crucial skills and developed my craft. I spent many years revising with my agent, and she taught me so much. Woman on the Edge took six years from concept to publication, and I’m still learning. Sometimes I wish it had happened for me when I was younger and there were fewer things in my life to juggle, but at almost forty-seven, it feels that much sweeter to see my dreams come true because I worked so long for it.

I have an amazing team at both my publishers, Simon & Schuster Canada and Headline in the UK, a wonderful network of support—from writers, bloggers, librarians, booksellers, and readers—and I just hope people connect with my work. I definitely spend time on social media, probably too much time, and I prefer Instagram and Twitter. and bloggers do so much for the book community, and they are one of the biggest reasons anyone knows about Woman on the Edge. I’m also so fortunate to know so many talented, prolific authors willing to read and blurb my work.

I do! First, don’t give up. Ever. It might not be easy and it might not be fast, but it will be worth it. My other advice would be to connect with other writers. The author community is warm and supportive, and no one can truly understand what you’re going through more than other writers. Without my community, who are my beta readers, critique partners, sounding boards, and inspirations, I wouldn’t have been able to accomplish my goals.

My favorite band is Nine Inch Nails. Showing the 90s girl I still am. One of my favorite books is The Bridge to Terabithia, and , that’s a hard one. I have always loved The Unbearable Lightness of Being and Bridget Jones’s Diary. I have taste. Oh, and Reality Bites. I can watch that a million times. I probably have.

British Columbia and Alberta! I’ve been to Europe, the Middle East, North Africa, and Eastern Canada. But I’ve never seen the West Coast! And I’m dying to go to LA.

Thank you. A huge, heartfelt thank you, and so much gratitude, because without my readers, I couldn’t live my dream and have the career and life I have always longed for.

To connect with Samantha:

Samantha M. Bailey is a Toronto-based novelist, journalist, and freelance editor. She is also the co-founder of , a promotional and interactive author-reader event held in New York City and Toronto. Her #1 bestselling psychological thriller, WOMAN ON THE EDGE, by Simon & Schuster Canada and Headline UK, and will into seven languages. 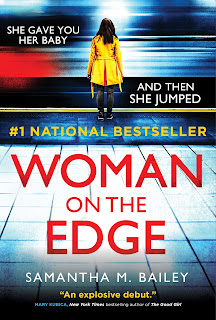 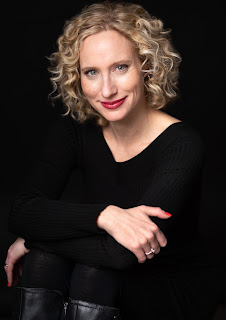