THIS IS HOME, by author LISA DUFFY

From the author of book club favorite The Salt House comes a deeply affecting novel about a teenage girl finding her voice and the military wife who moves in downstairs, united in their search for the true meaning of home.
Sixteen-year-old Libby Winters lives in Paradise, a seaside town north of Boston that rarely lives up to its name. After the death of her mother, she lives with her father, Bent, in the middle apartment of their triple-decker home—Bent’s two sisters, Lucy and Desiree, live on the top floor. A former soldier turned policeman, Bent often works nights, leaving Libby under her aunts’ care. Shuffling back and forth between apartments—and the wildly different natures of her family—has Libby wishing for nothing more than a home of her very own.
Quinn Ellis is at a crossroads. When her husband John, who has served two tours in Iraq, goes missing back at home, suffering from PTSD he refuses to address, Quinn finds herself living in the first-floor apartment of the Winters house. Bent had served as her husband’s former platoon leader, a man John refers to as his brother, and despite Bent’s efforts to make her feel welcome, Quinn has yet to unpack a single box.
For Libby, the new tenant downstairs is an unwelcome guest, another body filling up her already crowded house. But soon enough, an unlikely friendship begins to blossom, when Libby and Quinn stretch and redefine their definition of family and home.
With gorgeous prose and a cast of characters that feel wholly real and lovably flawed, This Is Home is a nuanced and moving novel of finding where we belong.

"Authentic characters resonate throughout this engrossing novel. . . . Intensely real and deeply emotional, Duffy’s rich novel is worth savoring from the very first page."

I started writing as a young girl—poetry, journaling, and an attempt at a novel when I was nineteen and sequestered in the house with chickenpox. It was a terrible novel, and then life rambled on: college, a job in the software industry, marriage, and three kids. When my youngest went to preschool, I went back to school for writing, hoping to give it a real shot. I still had some credits to finish on a degree in Women’s Studies. Once I had that, I was accepted into an MFA program in creative writing. My debut novel, The Salt House, came to fruition in those writing classes. After I graduated, I worked on it exclusively and found an agent. We sold it to Touchstone/S&S not long after. That’s the short synopsis of a long journey on my path to publication.

We live on a tidal river with our boat on the dock in our backyard, so we do a lot of boating in the summer. I love to cook. My husband does, as well. We have six kids in our blended family, ranging from 16 to 36. Never a lack of mouths or people willing to sit at our table and talk over a glass of wine. I tend to be a homebody, and this is my favorite time of year. Still warm enough to enjoy the outside, but cool in the evenings. I love to get a fire going in our woodstove, cook something delicious with Chopped on TV in the background, and good company at the table. Nothing better than that.

I always begin with voice. An opening sentence that won’t leave me alone. When I have a cast of characters, I take my time getting to know them. Some of it through writing, but a lot of imagining takes place away from my desk. Thinking about the characters or story when I’m driving or in the shower or going to sleep.

Little Women is the first book I read as a young girl that introduced me to an entirely different world. I think I fell in love with reading at an early age because of that book. And my love of reading led to my desire to write. To see if I could somehow create a world simply from my imagination and express it through words.

I’m working on my third novel, My Kind of People, releasing from Atria next summer, about class, identity, and betrayal colliding when a young girl is orphaned in a close-knit island community off the coast of New England.

I took some liberty with Libby and stole some of my own childhood for her character. I grew up in the middle apartment of a triple-decker in a suburb outside of Boston. My father was a policeman in my hometown. We had family members living on the first floor for various stretches of my childhood. It was noisy and crowded, and I didn’t always love it. Of course, it took growing up and moving away to see how much of it made me who I am today. We sold the house years and years ago, and sometimes I’ll drive by it when I’m in town, and there’s a tug inside. Still a part of me that feels as though I’m home.

Scenes with Rooster Cogburn were interesting to write. And fun too. We’ve always had labs as pets, and Rooster just appeared on the page as this big, gentle dog. I enjoyed spending time with him on the page.

Surround yourself with people who support your passion. It’s a lonely endeavor, less so when you don’t feel alone in it.

It can be all-consuming. Sometimes if you’re on a roll with a book, it can be hard to set aside the work. The best part is the writing itself. Getting to play with words all day.

Thank you. For reading and sharing your love for these characters. I’m forever grateful.

To connect with Lisa: 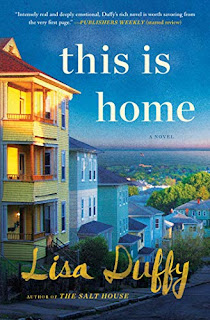