When tragedy strikes, people react differently. Many panic. Others mourn. Some exist as if nothing’s happened. And some use tragedy to drastically change their lives…

In internationally bestselling and critically acclaimed novelist Catherine McKenzie’s riveting and thought-provoking new novel, THE GOOD LIAR (Lake Union Publishing; on-sale April 3rd, 2018; hardcover; paperback; e-book), the lives of three women are forever altered by a national tragedy—and by the choices made in its wake.

A year ago, Cecily Grayson became the poster child for a horrifying explosion that ripped a Chicago building apart. She was supposed to be in the building that day. Instead, she stood on the street and witnessed it going down, with her husband and best friend, Kaitlyn, inside. While she watched, a photographer snapped a photo of her—a photo that would become one of the enduring images from that day.

Franny Maycombe, a young woman in search of her birth mother, watched the horror unfold on the morning news, knowing that the woman she was so desperate to reconnect with was in the building. As the anniversary dominates the media, the memories of that horrifying morning become dangerous triggers. A thousand miles away in Montreal, a third woman, Kate Ring, is working as a nanny for a wealthy family. Haunted by the anniversary of the Chicago explosion, Kate fights to keep her past from catching up with her.

All three women are guarding important secrets. Just how far will they go to keep them?

The idea for this novel has been percolating in McKenzie’s mind for years and began with this thought: What if someone used a national tragedy to run away from their life? Later, she discovered stories about people faking their way into tragedies. And finally, she learned of a 9/11 widow whose divorce was about to be finalized right before the towers fell. From there, she thought what-if, and began writing THE GOOD LIAR.

An irresistible look at ordinary people in extraordinary situations and a gripping and incisive exploration of deceit, THE GOOD LIAR is Catherine McKenzie at her best!

“A Hottest Thriller of 2018”—GOODREADS

“Complex, thought-provoking…Who the good liar may be, and what that phrase might actually mean are questions that will resonate long after the book is finished. Many will devour this book in one sitting.”

“Give this to fans of seemingly benign characters with dark inner lives like those in Liane Moriarty’s Big Little Lies.”
—BOOKLIST

“For many years, Catherine McKenzie has been writing some of the best thrillers around. She’s outdone herself with THE GOOD LIAR, the powerful and heartbreaking story of the painful aftermath of a national tragedy. It’s sharply written with engaging characters and twists and surprises up until the very last page. A smart, fast-paced, and riveting thriller!”
—David Bell, author of Bring Her Home

“With twists and turns, the lives of three women intersect in the most unexpected ways during the aftermath of a tragedy. Thought-provoking, suspenseful, and mysterious, The Good Liar is a true page-turner that explores the ways stories are connected and created, and what can be hidden underneath. This is a book you won’t be able to put down!”


—Megan Miranda, New York Times bestselling author of All the Missing Girls and The Perfect Stranger

Some Q & A with Catherine ~

I’m a lawyer. I always wrote growing up – poetry mostly – but in 2006 I had an idea that wouldn't leave me alone and that turned into my first novel which lives in a drawer.

Lots of places. Usually, I have several ideas coalesce into one – maybe a story I’ve heard, or an article I’ve read will start my imagination going.

Nick Hornby had a big influence on my early writing.

Once I finished Arranged (the first “real” novel I wrote), I got an agent – that took about six months of querying. She then spent the next year and a half trying to sell it. In the meantime I wrote Spin. She finally sold that novel in a two book deal in Canada in July 2009 – almost two years after we’d started working together. It took another two years (and a change of agent) to get my first deal in the US in 2011. In short, I could paper a room with all my rejections.

Probably a lot of things, but that’s easy to say. I have a good career so I shouldn’t complain.

I’m on the 2nd draft of my next novel which is slated to come out in April 2019.

I try not to do that. I might be inspired by real life things that I’ve read about.

None comes to mind!

Publishing books is asking to be criticized. That’s the main downfall, I think. The best part is hearing from readers whose lives you’ve affected.

A big fan of Matt Nathanson. But I listen widely. I cannot pick one book!

Too many places to name!

To connect with Catherine: 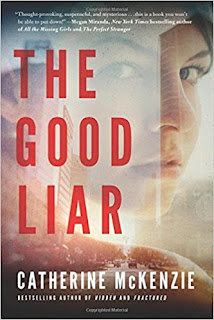