DAUGHTERS OF THE NIGHT SKY, by author, AIMIE K. RUNYAN

A novel inspired by the most celebrated regiment in the Red Army— About a woman’s sacrifice, courage, and love in a time of war. Russia, 1941. Katya Ivanova is a young pilot in a far-flung military academy in the Ural Mountains. From childhood, she’s dreamed of taking to the skies to escape her bleak mountain life. With the Nazis on the march across Europe, she is called on to use her wings to serve her country in its darkest hour. Not even the entreaties of her new husband—a sensitive artist who fears for her safety—can dissuade her from doing her part as a proud daughter of Russia.


After years of arduous training, Katya is assigned to the 588th Night Bomber Regiment—one of the only Soviet air units composed entirely of women. The Germans quickly learn to fear nocturnal raids by the daring fliers they call “Night Witches.” But the brutal campaign will exact a bitter toll on Katya and her sisters-in-arms. When the smoke of war clears, nothing will ever be the same—and one of Russia’s most decorated military heroines will face the most agonizing choice of all.


Tell us a little bit about yourself, and how you started writing.

I actually started writing when I was a kid. Plays, poems, short stories… I even started writing a novel when I was in high school (yes, it was historical fiction!) The problem? Aside from some really terrible short poems, I never finished my projects. I was convinced that I was wasting my time because I wasn’t a ‘real writer’. I ended up taking some grad school creative writing classes while working on my MA in another field and ended up writing the short story that would become Promised to the Crown. It sat in a drawer for ten years until I had the courage to finish it.

Hiking, going to the movies and theater, reading, baking, and above all—traveling!

Not a paying gig. I have two small kids who employ me as their personal chef and chauffeur. They pay in snuggles. #worthit

So far, a grad school class, my weird and twisted brain, and online articled forwarded to me by friends.

Is there a particular author or book that influenced or inspired your decision to write?

The two that come to mind are Ken Follett’s Pillars of the Earth and Philippa Gregory’s Tudor series. Gorgeous, immersive books!

Yes! The women of the 46th Taman Guards were very real. While the characters in my book are of my own creation, many of the anecdotes they share and some of their personality traits are taken from real experiences and real women. I decided to use factionalized characters rather than historical figures so I would have to take fewer liberties with the timeline, regiment assignments, and so on.

I love the scene in the meadow where Vanya paints a portrait of Katya. It’s definitely the most romantic in the book, and one that I think is very revealing about the characters and their hopes and desires.

I’m working on a novel, Girls on the Line, about the women who were sent over to France as telephone operators in WWI. There were more women in the armed forces in the first world war than we ever hear about, which is a pity because their involvement killed the anti-women’s suffrage movement. It’s been a joy to write, and you can all enjoy it this November just in time for Veteran’s Day!

I’m a huge fan of the old axiom, “stop aspiring and start writing”. Set aside time every day—or at least on a regular schedule—and write. Take it seriously. Read good craft books (don’t assume they all are, but even the worst of them may have a pearl of wisdom). Find your process. That part isn’t easy. It may change from project to project, but eventually, you will know how you tick as a writer. Talk with writers about the business as well as the craft. Have realistic expectations for your career, as well as realistic long and short-term goals. You *can* make a living at writing, but that will look vastly different than what the novice writer thinks it will.

It’s impossible to leave the office. Especially when I’m neck deep in drafting or the meaty parts of editing, and it makes me tiresome company at times. That said, this is an amazing job.

Thank you for all your support of Daughters of the Night Sky! I am humbled by the love you have shown for this precious project of mine, and I am forever grateful!

To connect with Aimie ~ 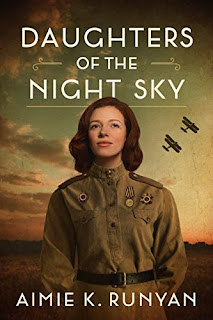 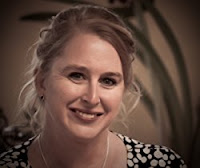