WHEN WE WERE WORTHY, by author MARYBETH MAYHEW WHALEN

A win brought them together, but loss may tear them apart.
When the sound of sirens cuts through a cool fall night, the small town of Worthy, Georgia, hurtles from triumph to tragedy. Just hours before, they’d watched the Wildcats score a winning touchdown. Now, they’re faced with the deaths of three cheerleaders—their promising lives cut short in a fatal crash. And the boy in the other car—the only one to survive—is believed to be at fault. As rumors begin to fly and accusations spin, allegiances form and long-kept secrets emerge.
At the center of the whirlwind are four women, each grappling with loss, regret, shame, and lies: Marglyn, a grieving mother; Darcy, whose son had been behind the wheel; Ava, a substitute teacher with a scandalous secret; and Leah, a cheerleader who should have been in the car with her friends, but wasn’t. If the truth comes out, will it bring redemption—or will it be their downfall?

“A fast-paced, heart-pounding story with secrets, tragedy, finger pointing and forgiveness. The characters are multifaceted and interesting: some are caring, some cunning, some are hard as stone, and others are unpredictable. Whalen is a talented author and she brings small town values and troubles to life in this novel.” —RT Book Reviews

“When We Were Worthy is a startlingly clear look at life in a small town where the carefully crafted characters are neither heroes nor villains—they are simply real people wedged into an unimaginable situation. Heart-wrenching and vivid, this is a beautifully written novel about letting go and holding on, of family, of love, and, ultimately, of forgiveness.” —Karen White, New York Times bestselling author

“When We Were Worthy is a poignant, haunting story of truths and secrets—the power of tragedy to unravel an entire community, and then stitch it back together—I couldn’t turn the pages fast enough.” —Amber Smith, New York Times bestselling author of The Way I Used to Be

Some Q & A with Marybeth:
Tell us a little bit about yourself, and how you started writing.

I’ve been married for 26 years to the love of my life and best friend (I know that sounds cheesy but it’s true) and we have six children, ranging in age from young adult to tween. When I’m not chauffeuring them around or cooking for them, I try to eke out some writing time.
I’ve written for as long as I can remember. As a child I always had a notebook of stories I was working on, though at that point I never dreamed I’d actually write a whole novel. I majored in writing in college. Basically it’s the only skill I came with.

Watching You Tube planner videos, working on my journals/planners, hanging out with friends, reading, traveling or dreaming of traveling

Mostly news items or stories people share with me—I can hear a story and think “what if…” and my imagination just takes over from there.

When I was young I thought that only people who lived in New York City could be “real writers.” J Pat Conroy and Lee Smith taught me that wasn’t true.

I had a lot of challenges getting published when I tried writing nonfiction. I wouldn’t attempt fiction because I was scared of rejection. It was only after I decided to go for it that I finally did get published.

I would try to not let fear control my decisions.

I run a site called She Reads www.shereads.org with my best friend Ariel Lawhon, who’s also an author. While we spend most of the time promoting other writer’s books, when we have a new book come out we do have the site, and our various social media platforms, in place to reach readers about our own novels.

My next novel is called ONLY EVER HER, a domestic suspense about a bride who disappears from her small South Carolina town a few days before her wedding, leaving friends and family to search for her while guarding their own closely held secrets.
I’m writing it now and, Lord willing, it’ll be released next fall.

In 2007 I read an article in People magazine about a carload of cheerleaders who were hit head on by a semi on their way to a party in MI. I tore out the article and saved it because I thought I’d write about that someday. Then about two years ago I saw a tv show about the same thing happening in TX. Not long after I saw that show I began fleshing out WHEN WE WERE WORTHY.

The novel opens and closes with the dead cheerleaders talking, kind of the Greek chorus of the book. I really love their voices.

Read a lot. It’s like the example of the math problem in the textbook. It’s one thing for someone to tell you how to do it. It’s another thing to see it successfully done.

The downfall is that you have to govern yourself, you have to be disciplined about working steadily so that word count will keep going up. And sometimes you just plain old don’t want to. Also the self-promotion aspect of marketing your book can get kind of wearying sometimes.
The best part is connecting with readers and knowing that you gave them some enjoyment or insight from something that you made up in your own head.

Thank you for reading! 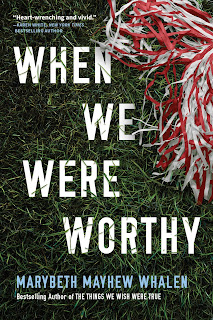 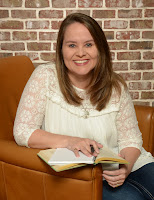