Set in the lush hills of the French Ardennes and the scorched mountains of Southern Italy, Beautiful Secret is a tale of family secrets, forbidden love, and unexpected blessings.
Maria’s story unfolds in 1940’s Italy, where family ties and tradition are of utmost importance. When Maria is seduced by her cousin's fiancé, she becomes pregnant, and the scandal destroys her family. Whisked away from her poor rural village of Tronca to a severe Catholic convent several mountain towns away, she gives birth to a son. Maria is under tremendous pressure to give her baby up for adoption. Against the odds, she manages to keep her child and then must find a way to get him back to the home and family that is his birth right.
Years later, after being forced to marry and emigrate to America, Maria is at the end of her life. As she lies on her deathbed in a Pittsburgh hospital, Maria shares her story with her beloved granddaughter, Tatiana.
Awash in her own marital troubles, Tatiana agrees to Maria’s dying wish – to travel to Europe and  retrieve a package from an aunt she’s never met.  When Tate journeys to the land of her ancestors, she fully expects to meet her long lost family and to lay eyes on the places that cultivated a spirit like her Nana Maria’s. What she doesn’t anticipate is falling into a forbidden love affair with a sexy French man who happens to be her distant cousin by marriage. Throughout her journey, Tate not only discovers a shocking secret that Nana Maria waited a lifetime to disclose, but she also finds that the trick to life doesn’t lie in the best laid plans but in how you react to the things you never expected. 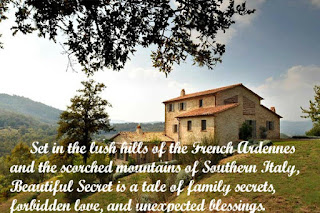 "Maybe the trick to happiness isn't the best laid plans, but how you react to what you never planned for."

Tell us a little bit about yourself, and how you started writing.
I have been writing since I was very young. As a young child, I wrote short stories and silly riddles – Shel Silverstein and Dr. Seussish. In high school, poetry was a survival skill for me as I navigated the myriad of adolescent emotions in my life.  I wrote my first book when I was a junior in high school. It was a romance.
What are some things you enjoy when not writing?

I love to cook, and I love to travel. My favorite places to go are Marco Island, Florida – to relax and enjoy the beach, New York City – to eat at the best restaurants in the world and see Broadway shows, and, of course Europe – to visit my wonderful French and Italian family.

Is anything in your book based on real life experiences? Yes, Maria's journey is based on the real –life story of my Nana, who became pregnant out of wedlock as a young woman in 1950's Southern Italy and gave birth to my father in a home for unwed mothers.

One of my favorite scenes is when Maria gives birth. Another is when Tate first arrives in Italy and has dinner under the grape arbor at her Zia Mimma's house – which is based on my Zia Mimma's house!

Is there anything you’d like to say to your readers and fans? Thank you for reading Beautiful Secret! I hope the story captures your spirit and transports you to Italy and France – the places that hold my most precious

To connect with Dana:

~author of Beautiful Secret and The Whisper Trilogy 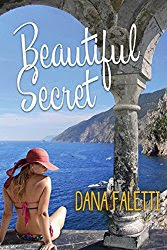