In 1919, the Turner sisters and their parents are barely scraping by. Their father is a low-paid boot-stitcher in Johnson City, New York, and the family is always one paycheck away from eviction. When their father’s hand is crushed and he can no longer work, their irrepressible mother decides that the vaudeville stage is their best—and only—chance for survival.

With so much at stake, teenagers Gert, Winnie, and Kit, and recent widow Nell take to the road, and soon find a new kind of freedom in the company of performers who are as diverse as their acts. There is a seamier side to the business, however, and the young women face dangers and turns of fate they never could have anticipated. Heartwarming and surprising, The Tumbling Turner Sisters is a story of awakening—to unexpected possibilities, to love and heartbreak, and to the dawn of a new American era.

“In this novel of love, grit, and the everlasting strength of family, the Turner sisters dare to dream big. Don’t miss this page-turner!”
~ SARA GRUEN, #1 NEW YORK TIMES BESTSELLING AUTHOR OF WATER FOR ELEPHANTS

Some Q & A with Juliette:

Your previous novels take place in the present time, what made you decide to write a historical fiction novel?
I’ve always loved reading historical fiction, but questioned whether I had the background to write it. Don’t you need some sort of history degree to write about a completely different time? As it turns out, the answer is no. As with any story about a complicated topic—for instance if a character has a certain medical condition or line of work that’s central to the story—you just have to be willing to submerge yourself in the subject matter and learn everything you can.

The research for The Tumbling Turner Sisters was so much fun! The world was changing quickly in 1919, just after World War I, with Prohibition and Women’s Suffrage on the horizon. These social and political changes forced people take a look at the way things had always been done, and start to question if there weren’t better ways. The subculture of vaudeville was this crazy little brother-and-sisterhood, with its own customs, rules and slang. I learned far more than I could ever have put in the book, and it was a blast.

Is anything in your book based on real life experiences?
In the past, just as I’d finish one novel, there was always another idea out there simmering, waiting for me to bring it to a full boil. That didn’t happen after my last book, and it was really starting to get to me. I had a lot of “first dates” with story ideas, but no seconds.

One day my father came over for lunch, and in an effort to help, he started listing things he thought I should write about. These included a book on President Lincoln -- and I’m thinking I’m pretty sure that’s been done before …not really dying to be compared to Team of Rivals! – or on Oliver Cromwell’s violent domination of Ireland, which basically started out as a tragic bloodbath and went downhill from there.

As he talked about how his own ancestors had fled the Irish famine and English repression, I suddenly remembered a picture he’d sent me of his grandfather dancing onstage, along with newspaper clippings about his vaudeville career in the early 1900s. Vaudeville! Sitting there over the remains of our lunch, my head was suddenly exploding with ideas.

The Tumbling Turner Sisters was inspired by the experiences of my great-grandfather, Fred Delorme, but it’s not based on his actual life. In gratitude for his inspiration, I named one of the characters after him. I like to think that he’d be tickled to be back in the entertainment business a century later!

What are you working on now?
I loved diving into the early 20th century, and learned far more than I could possibly include in The Tumbling Turner Sisters. One of the subjects that really caught my interest was the silent movie era. Once it coalesced in Hollywood in the 1910s, it really was like the wild west, attracting all kinds of people who wanted to try their luck in this budding industry. No one at the time thought much of it – it was considered more of a fad, and so it was full of risk-takers. My next novel is set in that time and place.

Juliette Fay is the award-winning author of four novels: The Tumbling Turner Sisters, The Shortest Way Home, Deep Down True, and Shelter Me. She received a bachelor’s degree from Boston College and a master’s degree from Harvard University. Juliette lives in Massachusetts with her husband and four children. Her website is juliettefay.com. 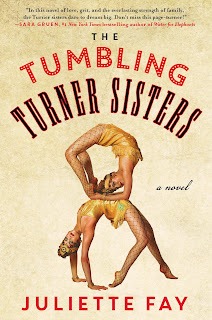